Economic Integration in NAFTA and the EU 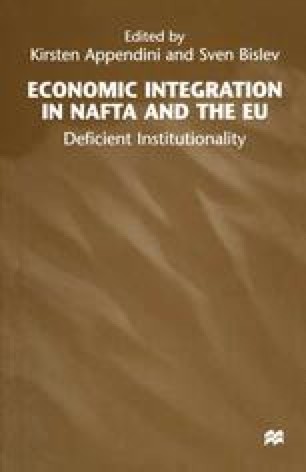 Successful Integration and Economic Distress: The New Dual Economy — the Case of Mexico in NAFTA

1994 was the first year of Mexican integration in the North American Free Trade Agreement (NAFTA), and the start of a period when Mexico was supposed to benefit from the further opening up of its economy. It turned out, however, to be one of the most turbulent years in the recent history of the Mexican economy. The substantial outflow of capital which began in the second quarter of 1994, ultimately led to a significant loss of foreign exchange reserves, abandonment of the pegged exchange rate regime, and a 71 per cent real depreciation of the peso. The question frequently raised was, what went wrong with the Mexican economy? After all, it appeared that the programmes for stabilization and structural change that were implemented by the Mexican authorities from the mid-1980s were rather successful in reducing the rate of inflation and improving the efficiency of Mexican producers. Above all, the core of the new programmes was from the begining oriented towards creating a new structural relationship with the rest of the world: essentially a new pattern of integration.

Exchange Rate Real Exchange Rate Trade Liberalization Successful Integration North American Free Trade Agreement
These keywords were added by machine and not by the authors. This process is experimental and the keywords may be updated as the learning algorithm improves.
This is a preview of subscription content, log in to check access.