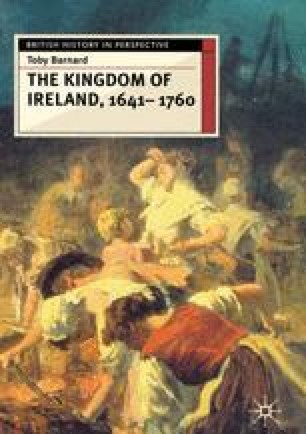 English policy aimed to eradicate Catholicism from sixteenth- and seventeenth-century Ireland. Failure quickly to do so led to a more limited although still ambitious scheme to remove its leaders. Government service was closed to those who would not profess Protestantism. Other openings — in the law, education and even skilled crafts — narrowed and sometimes closed. By the early eighteenth century, the only profession in Ireland open to Catholics was medicine.354 However, the most important element in the leadership of Catholic Ireland, the priesthood, although harassed, survived. Even Protestant observers thought that the lack of priests was more damaging than their presence. Near Dublin, at Ballymore, parishioners, deprived of Catholic worship, were left ‘without even the sense or thought of religion’. As a result, the people were said to ‘die rather like beasts than Christians’.355 In other places, such as County Kerry, the Catholic priesthood was more active than the established Protestant church. There the negligence of Protestant ministers made parishioners turn to Catholicism, ‘and several are buried like swine for want of a parson, and others are forced to get popish priests to baptize their children or suffer ‘em to die without baptism’.356 Priests and schoolteachers worked — at different moments — under threat of imprisonment, banishment or even death. Yet, by 1731 enquiries uncovered more than 2300, both the regulars (members of religious orders like Franciscans, Capuchins and Dominicans) and secular (essentially parish) priests. In addition, 549 Catholic schools were noted. Probably the number was considerably larger.357

Seventeenth Century Catholic School Grand Jury Early Eighteenth Century Parish Church
These keywords were added by machine and not by the authors. This process is experimental and the keywords may be updated as the learning algorithm improves.
This is a preview of subscription content, log in to check access.