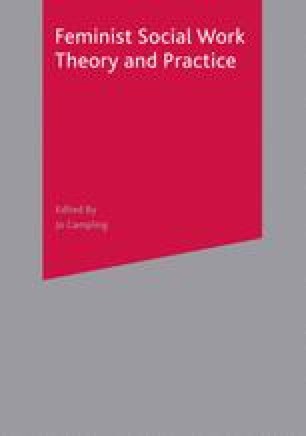 Feminist social work theory and practice has been developing apace in the past two decades bringing many innovations into the discipline. It has both friends and enemies within the system. And it has a considerable distance to go in reaching its objectives in tangible forms that permeate the broader society. With regard to social work, feminists have highlighted the importance of gender dynamics in a profession begun by women. The preponderance of women within its borders has not guaranteed that women’s interests as women are recognised and responded to. Thus, feminists have had to develop a theory and a practice that places women at the centre of its interventions. From there, feminists have ensured that their work ripples out to encompass all people, regardless of gender. Additionally, feminists have created theories and proposals for practice that respond to critiques from within women’s ranks to encompass the rich diversity of social divisions that women embrace. Feminists have developed analyses and social action whilst living in insider—outsider roles. That is, they have to work against being oppressed and being oppressive simultaneously.

Social Division Broad Society Gender Dynamic Feminist Principle Unequal Power Relation
These keywords were added by machine and not by the authors. This process is experimental and the keywords may be updated as the learning algorithm improves.
This is a preview of subscription content, log in to check access.