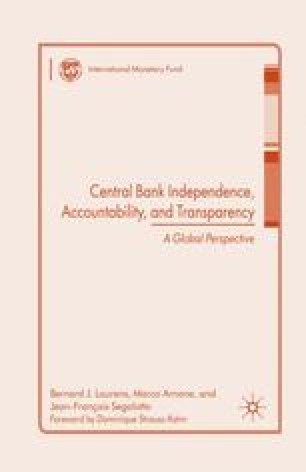 Our assessment of CBs’ governance framework shows that CBs have changed dramatically in the past three decades in ways that would have been inconceivable back in the late 1970s or early 1980s. Building on the literature that highlights their benefits, CBs, irrespective of the country’s income level, have been granted higher independence; have become more accountable to those which have granted them independence; and have significantly boosted the transparency of their operations. Such a framework for CB governance which developed over time is based on the consensus that CBs should be entrusted with the primary mandate to preserve the public good of stability. This broad-based consensus stems from the view, backed by empirical analysis, that price stability is the best contribution that monetary policy can make to help the economy achieve its maximum potential output, and that any attempts to sacrifice the medium-term goal of price stability for efforts to meet other short-term objectives will adversely affect the credibility and effectiveness of the CB and ultimately weaken long-term economic growth. To allow the CB to achieve its delegated responsibility of protecting price stability, it must be made independent from the government so that its decisions are not influenced by short-term political and electoral objectives.1 However, independence does not mean isolation, and the CB must be accountable to those from whom it receives its mandate and independence.

Monetary Policy Financial Market Central Bank Price Stability Banking Supervision
These keywords were added by machine and not by the authors. This process is experimental and the keywords may be updated as the learning algorithm improves.
This is a preview of subscription content, log in to check access.