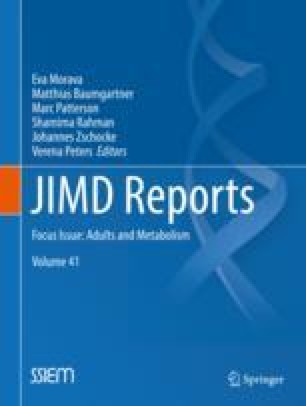 Cognitive Impairments and Subjective Cognitive Complaints in Fabry Disease: A Nationwide Study and Review of the Literature

Fabry disease is a rare progressive X-linked lysosomal storage disorder which leads to neuropathic pain, organ dysfunction and cerebral pathology. Few studies have investigated cognitive impairment in Fabry disease and these previous studies are difficult to compare due to heterogeneous methodological designs and small cohorts. The objective was to investigate the frequency of cognitive impairment in the Danish nationwide cohort of Fabry patients. Further, we examined if subjective cognitive complaints were associated with objective cognitive performances in this patient group. Neuropsychological tests (17 measures) and evaluation of subjective complaints with the Perceived Deficits Questionnaire (PDQ) were applied in 41 of 63 patients. According to an a priori definition, 12 patients (29.3%) were cognitively impaired. Tests tapping psychomotor speed, attention and executive functions had the highest frequency of impairment. In general, disease related variables as Mainz Severity Score Index, enzyme activity and years since onset and depression did not have a significant impact on the categorisation of patients as being cognitively impaired or non-impaired. Thus, cognitive impairment in Fabry disease does not seem to occur solely by having symptoms for many years or by having high disease burden. However, impaired neuropsychological test results were significantly more common in patients with cerebrovascular disease. Only three patients had scores in the abnormal range of the PDQ scale and subjective perceptions of cognition were not associated with cognitive performances. The levels of subjective cognitive complaints were generally very low in the studied patients demonstrating that the absence of subjective cognitive complaints does not exclude the presence of objective cognitive problems.

This article provides important insight regarding the frequency and nature of cognitive impairments in a large cohort of patients with Fabry disease both as measured by a large neuropsychological battery and as experienced by patients.

Ulla Feldt-Rasmussen has received honoraria for lectures and participation in advisory boards from Genzyme, Shire HGT and Amicus, and unrestricted research grants from Shire and Genzyme.

AV and UFR conceptualised and designed the study. JL, CVM and AV analysed the data. JL drafted the article with major contribution from AV. All authors gave important input to the intellectual content of the manuscript, and all authors have read and approved the manuscript for submission.

© Society for the Study of Inborn Errors of Metabolism (SSIEM) 2018