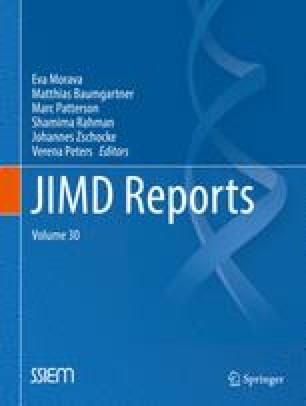 Biomarkers in a Taurine Trial for Succinic Semialdehyde Dehydrogenase Deficiency

Aim: We tested the hypothesis that patients with succinic semialdehyde dehydrogenase (SSADH) deficiency on taurine would have decreased cortical excitability as measured by transcranial magnetic stimulation (TMS) and improved cognition, due to taurine’s partial GABA(A and B) receptor agonist effects and rescue in the null mouse model from status epilepticus and premature lethality.

Method: Biomarkers including neuropsychological testing, TMS, and CSF metabolites were studied in a cohort of patients on and off three months’ taurine treatment.

Interpretation: TMS demonstrated decreased inhibition in patients on taurine, in contrast to the study hypothesis, but consistent with its failure to produce clinical or cognitive improvement. TMS may be a useful biomarker for therapy in pediatric neurotransmitter disorders.

Conditioning Stimulus Transcranial Magnetic Stimulation Motor Threshold First Dorsal Interosseous Cortical Silent Period
These keywords were added by machine and not by the authors. This process is experimental and the keywords may be updated as the learning algorithm improves.

The trial was funded by The National Institute of Neurological Disorders and Stroke Division of Intramural Research and NIH R01 HD58553.

Dr. Schreiber, Wiggs, Wassermann, and Theodore and Mrs. Dustin performed this research as part of their employment with the National Institutes of Health.

All procedures followed were in accordance with the ethical standards of the responsible committee on human experimentation (institutional and national) and with the Helsinki Declaration of 1975, as revised in 2000. Written informed consent was obtained from all parents or guardians of subjects participating in the study. Proof that informed consent was obtained is available upon request.