The Rivers of Greece 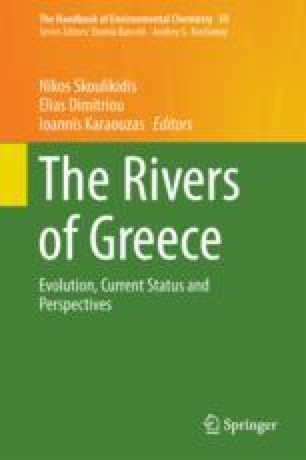 Overview of the Pesticide Residues in Greek Rivers: Occurrence and Environmental Risk Assessment

Chapter
Part of the The Handbook of Environmental Chemistry book series (HEC, volume 59)

During the past decades, there has been a growing concern related to the presence of “emerging” and “priority substances” in surface waters. For this reason, the European Union (EU) Water Framework Directive (WFD) (Directive 2000/60/EC) has established the bases to regulate water resources with the objective of preserving, protecting and improving their quality and sustainable use. In this context, this chapter provides an overview on the occurrence and levels of pesticide residues in Greek river waters, over the last 30 years [between 1985 and 2015; “past” (1985–2005) and “recent” (2006–2015) pesticide investigations] in order to describe trends in water quality status and assess potential adverse effects in the aquatic environment. The assembled data clearly demonstrate that agricultural practices in Greece have aggravated the water quality of rivers and may have posed considerable risk for certain ecosystems. The rivers that were monitored in a systematic way, mainly in the past period, were Aliakmon, Axios, Loudias, Louros, Arachthos and Kalamas, while there is a lack of data for other important rivers. Most of the detections involve a limited number of herbicides used extensively in corn, cotton and rice production, as well as the banned organochlorine insecticides that are persistent in the aquatic environment. Overall, the concentrations detected throughout the running waters of Greece were very small fractions of levels that, according to environmental risk assessment analysis, are believed to be non-harmful to aquatic life. However, in some areas with intense agricultural practices and hence high pesticide application, the environmental concentrations of pesticides were in non-compliance with the environmental quality standards (EQSs, Directive 2008/105/EC). The outcomes of this review reveal that there is a need for harmonisation in the sampling strategy and monitoring practices should be in accordance with the WFD. For future campaigns, specific insight into agricultural treatments and land use in the river basin could contribute to optimised water monitoring.

This research has been financed by the Hellenic Centre for Marine Research – (HCMR), through the research programme “Analysis of aqueous samples for the determination of pesticide residues in river network of Messenia area”, research grant no. 87093, which is gratefully appreciated.