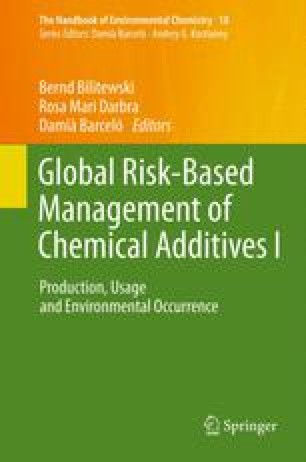 Chapter
Part of the The Handbook of Environmental Chemistry book series (HEC, volume 18)

Electrical and electronic equipment is one of the most dynamic sectors of the economy, comprising 4.5% of the Brazilian gross domestic product (GDP) [1]. This market is growing faster than the country’s GDP. Although business volumes are high, there is no formal specific structure for treatment of waste electrical and electronic equipment (WEEE) in Brazil. A general law on solid waste was approved by the Congress and signed by the president in August 2010, but further enabling regulations still need to be issued.

Waste of electrical and electronic equipments

Appendix A: Recycling Companies In Brazil

Approval by a governmental authority is mandatory for projects for treatment and disposal of solid waste.

CONAMA Resolution 1-A of January 1986

Regulation of transport of hazardous substances.

Regulation of management of solid waste at ports, airports, railroad, and trucking terminals.

Requires authorization of the National Nuclear Energy Commission for importation or exportation of radioactive material.

Regulates the importation and use of hazardous substances and classifies solid waste.

Establishes rules on prevention and control of pollution at service stations.

Establish directives, criteria and procedures for the management of solid waste from construction projects.

Establises procedures and criteria for thermal treatment for solid waste.

Includes asbestos as a hazardous substance in CONAMA Resolution 307/02.

Treatment and final disposition of solid waste from hospitals and other health care facilities.

Establishes criteria and procedures for the agriculture use of sewage from treatment plants.

Establishes maximum limits for lead, cadmium, and mercury for batteries and presents criteria and procedures for sound management.

Establishes criteria and directives for the environmental licensing of small-scale landfills.

Prevention of environmental harm from unserviceable tires and their final disposal.