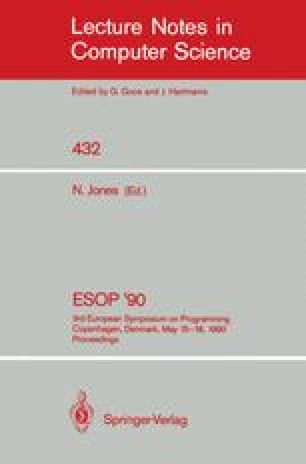 A syntactic theory of transparent parameterization

We present a calculus for Lamping's programming system of transparent and orthogonal parameterization. The calculus is shown to be consistent, to have a standardization procedure, and to correspond with an operational semantics obtained from the denotational semantics by viewing the semantic equations as state transition rules. Lamping's system is remarkable because it is small, having only four constructions, yet it can easily express a wide variety of parameterization mechanisms including lexical variables, dynamic variables, procedure calls, first-class environments, modules, and method lookup and inheritance mechanisms of object-oriented systems. Due to its orthogonal and transparent parameterization mechanisms, every object, including data and code, in Lamping's programming system can be parameterized, and a parameterized object can be manipulated as if it were a ground object. This blurs the distinction between data and code, allowing one to think of data as code and vice versa.

Operational Semantic Data Dist Denotational Semantic Ground Object Lexical Variable
These keywords were added by machine and not by the authors. This process is experimental and the keywords may be updated as the learning algorithm improves.

Supported by the National Science Foundation under grant CCR 89-01919.

Supported by the National Science Foundation under grant CCR 87-02117.