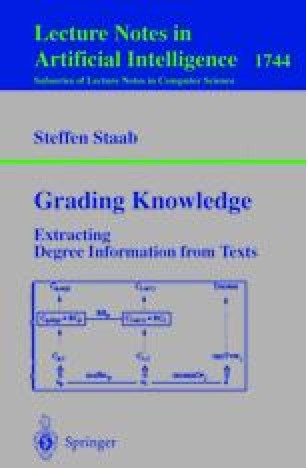 “Text Knowledge Extraction” can be defined as a computation process that maps a natural language text onto a formal, most often partial, representation of the facts contained in the text. It maybe exploited for means of fact retrieval/extraction (Grishman & Hirschman, 1978; Jacobs & Rau, 1990), question answering (Scha, 1990; Cercone & McCalla, 1986), summarization (Alterman, 1992; Hutchins, 1987), or even machine translation (Nirenburg et al., 1992; Carbonell & Tomita, 1987).

Conferences like the Message Understanding Conference (MUC, 1999) series demonstrate the broad interest that is dedicated to the field. At the same time, and this has been the case especiallyin recent years, the methodologies that are most often drawn from have rather limited scopes, such as named entity recognition (Mikheev et al., 1999) or information extraction, which boils down to filling a rather restricted set of “templates” (Appelt et al., 1993). The reason underlying this focus on low-level, knowledge-poor techniques has of course been that earlier promises of deep understanding were disappointed due to the computational complexityin volved in comprehensive frameworks. Though the most comprehensive frameworks may, perhaps, take into account the manylinguistic difficulties that free text mayin volve, they have mostly failed to deliver this competence in practical computational settings.

This book has taken shape in a line of work that tries to find a compromise between techniques for deep and shallow linguistic processing of texts (cf. Hahn et al. (1999), Staab et al. (1999)) that, in addition, acknowledges the importance of domain knowledge and integrates it into the text understanding system. Thereby, background knowledge is not considered a nuisance that prevents text knowledge extraction, but rather it is seen as the backbone of the system that helps to find the proper text analysis and even allows to reduce the number of alternative readings. Rather then being detrimental to computational performance, it mayth us propel practical text knowledge extraction to a level of sophistication that maynot be reached bycommon information extraction techniques.

In this book, I applythe strategyjust outlined to an in-depth treatment of the computational understanding of “degree expressions” in natural language texts. Degree expressions are words or phrases that describe a gradable property, such as price, beauty, or quality. Many facts in the world, such as the velocityof two objects relative to one another, can onlyb e adequately described as gradable properties. Still other terms that usually have a clearcut extension are often perceived as having members that more closely fit the term than others, and, hence, are used in a graded way, too (cf. example (1.1); cf. Lakoff (1987), Kato (1986)).

Machine Translation Information Extraction Question Answering Gradable Property Comprehensive Framework
These keywords were added by machine and not by the authors. This process is experimental and the keywords may be updated as the learning algorithm improves.
This is a preview of subscription content, log in to check access.