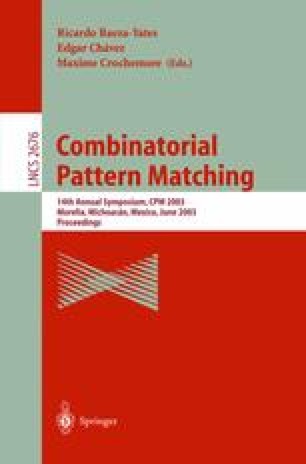 The next high-priority phase of human genomics will involve the development and use of a full Haplotype Map of the human genome [7]. A critical, perhaps dominating, problem in all such efforts is the inference of large-scale SNP-haplotypes from raw genotype SNP data. This is called the Haplotype Inference (HI) problem. Abstractly, input to the HI problem is a set of n strings over a ternary alphabet. A solution is a set of at most 2n strings over the binary alphabet, so that each input string can be “generated” by some pair of the binary strings in the solution. For greatest biological fidelity, a solution should be consistent with, or evaluated by, properties derived from an appropriate genetic model.

A natural model, that has been suggested repeatedly is called here the Pure Parsimony model, where the goal is to find a smallest set of binary strings that can generate the n input strings. The problem of finding such a smallest set is called the Pure Parsimony Problem. Unfortunately, the Pure Parsimony problem is NP-hard, and no paper has previously shown how an optimal Pure-parsimony solution can be computed efficiently for problem instances of the size of current biological interest. In this paper, we show how to formulate the Pure-parsimony problem as an integer linear program; we explain how to improve the practicality of the integer programming formulation; and we present the results of extensive experimentation we have done to show the time and memory practicality of the method, and to compare its accuracy against solutions found by the widely used general haplotyping program PHASE. We also formulate and experiment with variations of the Pure-Parsimony criteria, that allow greater practicality. The results are that the Pure Parsimony problem can be solved efficiently in practice for a wide range of problem instances of current interest in biology. Both the time needed for a solution, and the accuracy of the solution, depend on the level of recombination in the input strings. The speed of the solution improves with increasing recombination, but the accuracy of the solution decreases with increasing recombination.

Problem Instance Input String Integer Programming Formulation Distinct Haplotype Haplotype Inference
These keywords were added by machine and not by the authors. This process is experimental and the keywords may be updated as the learning algorithm improves.