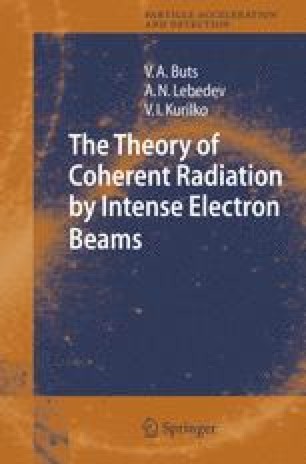 Even the qualitative considerations given above do indicate that the radiation emission by a charged particle moving uniformly in vacuum is impossible because the conditions of synchronism cannot be satisfied for any of free space proper waves. As is known, these waves propagate with the velocity of light, which always exceeds the velocity of a charged particle. Moreover, the radiation emission is a phenomenon invariant with respect to the choice of a reference frame. Therefore, impossibility of its realization in vacuum becomes obvious when one transfers to the rest frame of the charged particle, where the particle proper field in vacuum is of a purely electrostatic nature. The situation changes radically in the presence of a medium or another environment. This situation is not invariant under transition to new coordinates. In these systems, among their proper waves, there could be at least one wave synchronous with the particle over a long period of time and possessing the electric field component parallel to the particle velocity. The very possibility of the particle energy transfer to this wave—together with the fact that the latter can freely leave the radiation source—guarantees realization of the effect of radiation emission.

Charged Particle Phase Velocity Transition Radiation Stop Band Transmission Band
These keywords were added by machine and not by the authors. This process is experimental and the keywords may be updated as the learning algorithm improves.
This is a preview of subscription content, log in to check access.