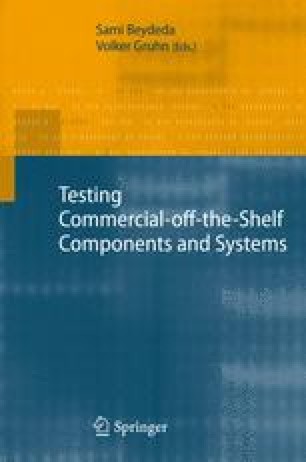 Documentation is one of the key issues in Component-Based System Development that emphasizes the creation of models of testing information. Hence, testing based on these models might point out missing entities — such as methods — or inconsistencies in the treatment of entities for testing. Documentation influences component specification as well as specific information for testing. For example, Hybertson in the chapter ‘Using a Specification Approach to Facilitate Component Testing’ declares that more precise and complete specifications will enable and simplify component testing, and Memon in the chapter ‘A Process and Role-Based Taxonomy of Techniques to Make Testable COTS Components’ presents some examples in the use of meta-information applied to regression testing. There are many other examples of techniques that enrich documentation by structuring and classifying information. Along those lines, aspect information has been used to help implement better component interfaces and to encode knowledge of a component’s capability.

In this chapter, we introduce an aspect-based categorization of information for testing. This information is added as a component’s metadata to generate aspect-dependent test cases. We will illustrate the proposed technique and its supporting tool, which allows us to add testing metadata to Enterprise JavaBeans (EJB) components.

Collaborative Work Relevant Method Java Interface Select Test Case Remote Interface
These keywords were added by machine and not by the authors. This process is experimental and the keywords may be updated as the learning algorithm improves.
This is a preview of subscription content, log in to check access.