Hormones and the Brain 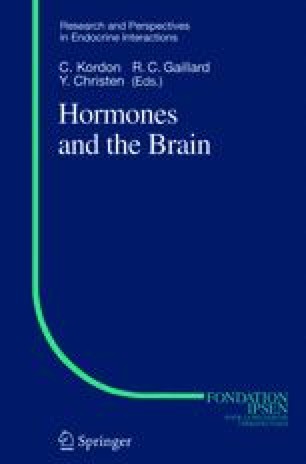 Genes turned on by hormones and genes whose products are essential for hormone-controlled behaviors have received intense study during the last 20 years. Now, we see that steroid hormones can also affect nerve cells by rapid membrane actions in addition to slower genomic actions. At the molecular level, in transient transfection studies of neuroblastoma cells using a 2-pulse protocol, we have shown that the rapid effects in the first pulse actually can potentiate the later genomic actions in the facilitation of transcription. Signal transduction from the first, membrane-limited pulse, of the 2-pulse protocol uses multiple signaling pathways. Now, with in vivo behavioral studies on female sex behavior, we have discovered that the logical relations between the two actions are different from the simpler transcription studies in a surprising manner: The rapid membrane action need not be the first hormonal pulse in the 2-pulse experimental protocol. For behavior, the membrane-limited action can be the second pulse. How do these effects on hypothalamic neurons come about? At the neuronal level, estradiol can potentiate the excitatory effects of neurotransmitters such as histamine or NMDA. Using patch clamp studies (now followed up with calcium imaging studies), we see that estradiol can excite electrical activity in two ways, by increasing an inward current and by decreasing an outward current. The inward-going current is a sodium current; the outward-going current is a potassium current.

Tremendous progress has been made in discovering and conceptualizing hormone actions on gene expression in the CNS. Genes induced by estrogens in the mammalian forebrain influence a variety of neural functions. Among them, reproductive behavior mechanisms are very well understood. Their functional genomics provide a solid theoretical paradigm for linking genes to neural circuits to behavior. We propose that estrogen-induced genes are organized in modules: Growth of hypothalamic neurons; Amplification of the estrogen effect by progesterone; Preparative behaviors; Permissive actions on sex behavior circuitry; and Synchronization of mating behavior with ovulation (GAPPS). These modules represent mechanistic routes for CNS management of successful reproduction. The gene networks involved have been reviewed by Mong and Pfaff (2003); our paper develops the ideas and references presented there. Moreover, new microarray results add estrogen-dependent genes to our list for further study.

Sexual Arousal Mating Behavior Hypothalamic Neuron Steroid Hormone Action Preparative Behavior
These keywords were added by machine and not by the authors. This process is experimental and the keywords may be updated as the learning algorithm improves.
This is a preview of subscription content, log in to check access.