Ecology and Behaviour of Mesozoic Reptiles 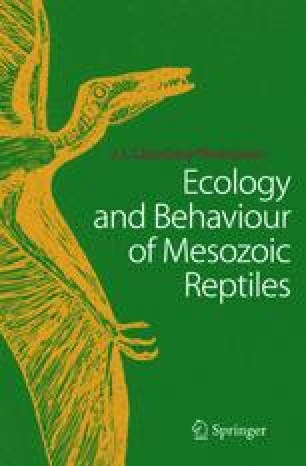 Ecology and Behaviour of Mesozoic Reptiles pp 61-87 | Cite as

Palaeontologists are generally in agreement that the pterosaurs would have flown almost, if not quite, as well as most modern birds. On the other hand, their locomotion on the ground, about which there is still some controversy, was almost certainly awkward and ungainly. Their flight may indeed have been like that of birds, but their locomotion and roosting behaviour were probably more like those of bats than of birds. Most of the smaller species were insectivorous; larger forms were piscivorous. Their dentition was adapted to their prey. They nested colonially and fed their nestling young until these were able to care for themselves.

Lower Cretaceous Late Jurassic Late Cretaceous Period Fourth Finger Quadrupedal Locomotion
These keywords were added by machine and not by the authors. This process is experimental and the keywords may be updated as the learning algorithm improves.
This is a preview of subscription content, log in to check access.