Petri Nets: Applications and Relationships to Other Models of Concurrency 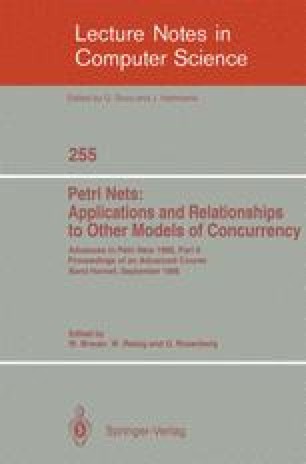 ACPN 1986: Petri Nets: Applications and Relationships to Other Models of Concurrency pp 135-170 | Cite as

Petri net based models in the specification and verification of protocols

Many approaches exist for the formal description of communication and cooperation protocols, as for instance Petri nets and their extensions, abstract data types, temporal logic, process algebras and high level languages. This paper presents how Petri net based models have been developped and used to specify and analyse the set of interactions which occur in distributed systems: it explains the use of these models in order to design, specify and validate the hierarchy of protocols and services which is to be dealt with when developping complex distributed systems. As layering proves to be of prime importance, the main specificities of the design of a complex distributed system are first related to a layered architectural model such as the OSI ISO/CCITT reference model. Then, after presenting some important Petri net based models, it is shown how net approaches can be used to model and handle the interactions and the protocols which exist in such layered distributed systems. Some important tools are also reported.