An R and S-PLUS® Companion to Multivariate Analysis 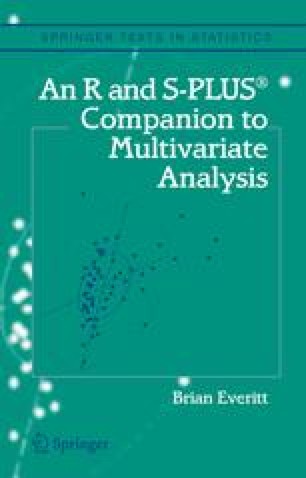 The multivariate data sets considered in previous chapters have involved measurements or observations on a number of different variables for each object or individual in the study. In this chapter, however, we will consider multivariate data of a different nature, namely that resulting from the repeated measurements of the same variable on each unit in the sample. Examples of such data are common in many disciplines. Often the repeated measurements arise from the passing of time (longitudinal data) but this is not always so. The two data sets in Tables 9.1 and 9.2 illustrate both possibilities. The first, taken from Crowder (1998), gives the loads required to produce slippage x of a timber specimen in a clamp. There are eight specimens, each with 15 repeated measurements. The second data set in Table 9.2 reported in Zerbe (1979) and also given in Davis (2002), consists of plasma inorganic phosphate measurements obtained from 13 control and 20 obese patients 0, 0.5, 1, 1.5, 2, and 3 hours after an oral glucose challenge.

Quadratic Effect Slope Model Random Slope Random Intercept Repeated Measure Data
These keywords were added by machine and not by the authors. This process is experimental and the keywords may be updated as the learning algorithm improves.
This is a preview of subscription content, log in to check access.