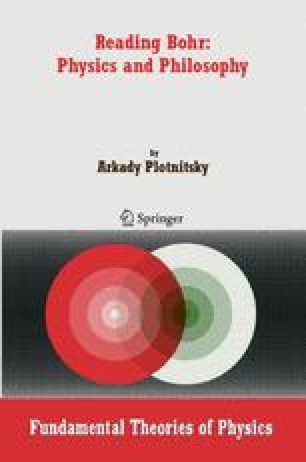 This chapter pursues two related but distinct topics, one historical and the other theoretical, both of which are barely explored in the literature on Bohr and on quantum theory. The first is the significance of quantum field theory for the history of quantum mechanics, including Bohr’s work, and the debates concerning it. The second is the relationships, especially philosophical and epistemological, between quantum mechanics and quantum field theory.54 A sustained exploration of these topics and the relationships between them is beyond the limits of this study. I thought it desirable, however, and in some respects imperative, to offer a sketch of the subject, first, in order to give a proper closure to my argument and, second, in order to explain why, as indicated at the outset of this study, quantum field theory leads us beyond Bohr but without leaving him behind. Bohr himself saw quantum electrodynamics and quantum field theory as confirming his key ideas concerning the epistemology of quantum mechanics, and possibly extending them through the new mathematics and physics that they help to develop.55

Quantum Field Theory Quantum Mechanic Quantum Theory Quantum Electrodynamic Classical Physic
These keywords were added by machine and not by the authors. This process is experimental and the keywords may be updated as the learning algorithm improves.
This is a preview of subscription content, log in to check access.