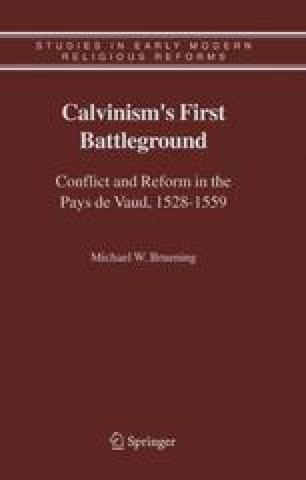 FROM THE PAYS DE VAUD TO FRANCE

Events in Vaud in the 1550s bolstered Calvin’s inclination to direct the energies of his reform movement away from the Swiss Confederation and towards France. The divisive theological issue was no longer the Eucharist; as Bern’s ministers pointed out, their unwillingness to subscribe immediately to the Consensus Tigurinus stemmed not from theological reservations, but from a desire to keep the peace. Indeed, Bern finally adopted the Consensus officially in 1551. In the new decade, however, the issues that would most sharply divide the reformers were ecclesiastical discipline and predestination.

City Council Moral Behavior Catholic Parish Catholic Clergy Swiss Confederation
These keywords were added by machine and not by the authors. This process is experimental and the keywords may be updated as the learning algorithm improves.
This is a preview of subscription content, log in to check access.