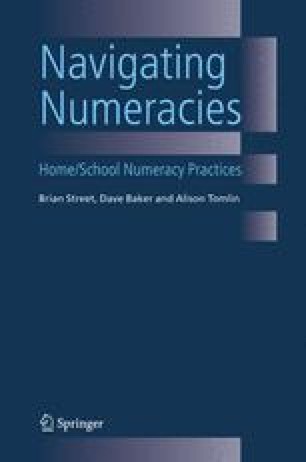 The actors in this account were Seth, his mother Jackie, his father Dennis, his brothers Jason and Darren and his teachers at Mountford Primary School Pamela and Zena and the researcher Dave. They lived in Mountford an area of Blatchford, a town in the south east of Great Britain.

When the researcher Dave first met Seth on the project he was just 5 years old and in the Reception class. By the end of the project he was in Year 2 at primary school and was 7 years old. He is an autumn born child and was one of the oldest in his class. He was seen as below average by the school in Reception class when he was 5 years old. By Year 2 he was seen as average or below in his class but well below average nationally. Seth was alert and lively, but large and rather over weight and was teased at school.

Seth had strong levels of concentration when doing activities he liked such as painting, drawing or writing. However, he could be distracted, particularly by his two older brothers. He was the youngest of three. Seth could be difficult to handle. When he and Dave visited a local shop during one home visit, when Seth was aged 5, the shop assistant became quite agitated and followed Seth around and became anxious when Seth began to delve into and take things off the shelves even when asked not to.

Private Tutor Numeracy Event Home Practice Special Educational Need Home School
These keywords were added by machine and not by the authors. This process is experimental and the keywords may be updated as the learning algorithm improves.
This is a preview of subscription content, log in to check access.