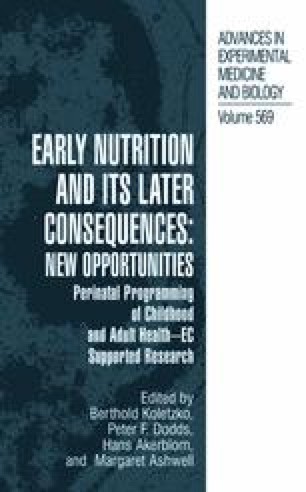 By using different experimental designs in the rat we have been able to answer several unanswered questions on the short- and long-term effects of alterations of lipid metabolism during the perinatal stage. The first was to demonstrate the importance of maternal body fat accumulation during the first half of pregnancy, since undernutrition in this critical period when fetal growth is slow, impedes fat depot accumulation and not only restrains intrauterine development but has long-term consequences, as shown by an impaired glucose tolerance when adults. Secondly, undernutrition during suckling has major long-term effect of decreasing body weight, even though food intake is kept normal from the weaning period. Our findings also show that a diet rich in n-3 fatty acids during pregnancy and lactation has adverse effects on offspring development, but cross fostered experiments showed that this effect was a consequence of the intake of these fatty acids during the lactation period rather than during pregnancy. Pups from dams that were fed a fish oil-rich diet during pregnancy and lactation were found to have altered glucose/insulin relationship at the age of 10 weeks. Since a n-3 fatty acid-rich diet decreases milk yield during lactation, additional experiments were carried out to determine whether decreased food intake or altered dietary fatty acid composition, or both, were responsible for the long-term effects on the glucose/insulin axis.

Results show that the decreased food intake caused by a n-3 fatty acid-rich diet rather than the change in milk composition during suckling was responsible for the reduced pancreatic glucose responsiveness to insulin release at 16 weeks of age.

In conclusion, present findings indicate that impaired maternal fat accumulation during early pregnancy and food intake during lactation, rather than a difference in dietary fatty acid composition, have major effects on postnatal development and affect glucose/insulin relationships in adult rats.