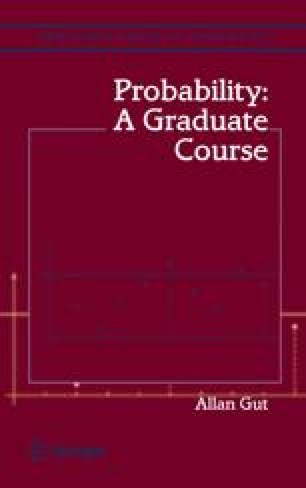 Let us recapitulate what we have learned so far. After an introductory chapter containing some set theory and measure theory, we met a chapter on random variables and expectations, the probabilistic equivalent of Lebesgue integration on finite measure spaces. This was then followed by a number of probabilistic tools and methods, and one chapter each on the three cornerstone results, the law of large numbers, the central limit theorem, and the law of the iterated logarithm — LLN,CLT, and LIL. So, what’s up next?

Characteristic Function Limit Theorem Central Limit Theorem Independent Random Variable Limit Distribution
These keywords were added by machine and not by the authors. This process is experimental and the keywords may be updated as the learning algorithm improves.
This is a preview of subscription content, log in to check access.