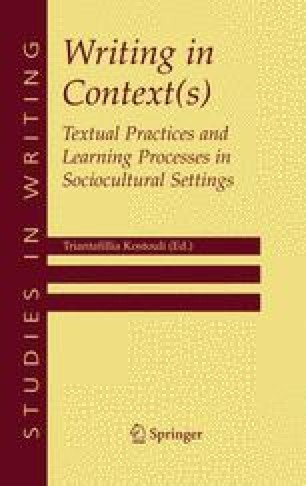 This chapter develops out of a broader study of 250 texts which were produced by 11th–13th grade students from both the US and France and were collected over a five-year period. The students were asked to create argumentative texts in which they explored questions about social issues after having read various (full or excerpted pieces of) published texts on these issues. The texts produced by the students are analyzed not as constellations of a stable set of linguistic-textual features, but as the result of a dynamic set of social and rhetorical negotiating moves in the discursive spaces of the school situation. The discussion explores a few of the interesting points of the tension between convention and creativity that have been located in six French students’ texts. Student writers use what M.L. Pratt calls “literate arts” to construct their texts. We can localize these arts in the identification and description of students’ movements of “reprise-modification” (François, 1998). This concept is a natural extension of Bakhtin’s dialogics, with each utterance acting as “a link in a chain.” Attention is directed to the identification of those textual movements with which students play with reproduction, reprise of the expected, but also proceed to the invention of the new, and modify the texts they encounter in the act of appropriating school discourse. The writer’s work between the common and the specific is part of the essential nature of school writing. As proposed, this analysis permits a better understanding of how average students’ texts interact with readings and with both cultural and educational commonplaces, working from the already-said and respecting — at least some but rarely all of — the limits of school expectations. This insight into students’ discursive activities subtly changes the way we read students’ work.