Asymptotic Cones and Functions in Optimization and Variational Inequalities 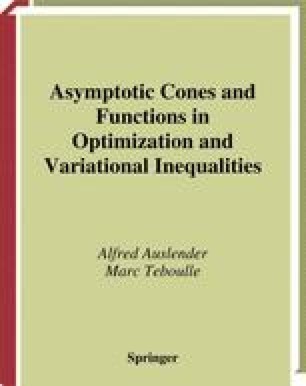 Duality theory plays a fundamental role in the analysis of optimization and variational problems. It not only provides a powerful theoretical tool in the analysis of these problems, but also paves the way to designng new algorithms for solving them. The basic idea behind a duality framework is greatly similar to the general mathematical line of thinking, namely to transform a hard problem into an easy or at least easier one to be analyzed and to be solved. A key player in any duality framework is the Legendre-Fenchel conjugate transform. Often, duality is associated with convex problems, yet it turns out that duality theory also has a fundamental impact even on the analysis of nonconvex problems. This chapter gives the elements of duality theory for optimization problems. Starting with a very general and abstract scheme for duality based on perturbation functionals, we derive the basic conditions leading to strong duality results, and characterization of optimal solutions. This covers well-known Fenchel and Lagrangian duality schemes, as well as minimax theorems for convex-concave functionals within a unified approach that emphasizes the importance of asymptotic functions.

Dual Problem Duality Result Perturbation Function Minimax Theorem Lagrangian Duality
These keywords were added by machine and not by the authors. This process is experimental and the keywords may be updated as the learning algorithm improves.
Download to read the full chapter text