Spaced Out: Policy, Difference and the Challenge of Inclusive Education 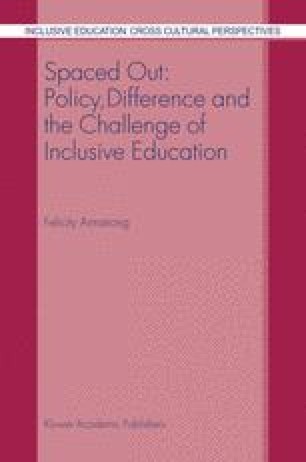 Spaced Out: Policy, Difference and the Challenge of Inclusive Education pp 29-53 | Cite as

Process, Practice and Emotion: Researching Policy and Space within a Cross-Cultural Framework

In this chapter I have attempted to outline some of the methodological and ethical issues which have arisen during the research process and the kinds of questions they have thrown up. In particular I have emphasised the role of subjectivity and the importance of exploring contexts in as much depth and breadth as possible in order to begin to analyse and interpret surface features of education systems and the accounts put forward by insiders.

Chapter Four, discusses the problems and challenges which arise in attempting to construct historical accounts. ‘Historical background’ is routinely included as ‘context’ in the presentation of many pieces of research and, early in the writing process I set out to write about ‘the history’ of special education in France and in England. As I drew on what others had written and tried to put things together in a smooth, and unproblematic chronology, I began to feel this was a rather empty exercise. Firstly, because this ‘history’ seemed to be taking on a life of its own, quite separate from the lives of real people. In excluding people in general, and disabled people in particular, I was contributing to their exclusion and ignoring their experience as if it did not count as knowledge. Secondly, there is an assumption in much of the literature that the history of special education is an unproblematic arrangement of (arte)facts such as government documents, legislation and statistical indicators which is unsatisfying

The chapter critically discusses some traditional accounts of the development of special education in England and France and challenges the idea that the passing of time is synonymous with ‘progress’ or improvement in the human condition.

Policy Making Special Education Research Process Social Practice Disable People
These keywords were added by machine and not by the authors. This process is experimental and the keywords may be updated as the learning algorithm improves.
This is a preview of subscription content, log in to check access.

Cite this chapter as:
(2003) Process, Practice and Emotion: Researching Policy and Space within a Cross-Cultural Framework. In: Spaced Out: Policy, Difference and the Challenge of Inclusive Education. Inclusive Education: Cross Cultural Perspectives, vol 1. Springer, Dordrecht. https://doi.org/10.1007/0-306-48164-2_3