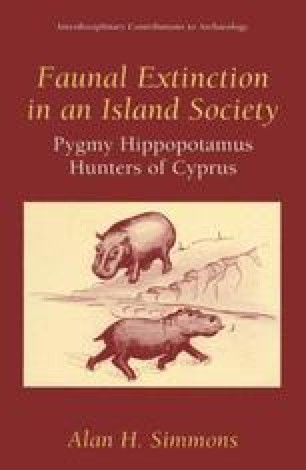 Cultural Material Faunal Remains Kill Site Passive Accumulation Burned Bone
These keywords were added by machine and not by the authors. This process is experimental and the keywords may be updated as the learning algorithm improves.

Heaven knows how true all this was: but it was true for them. And the bibliography of Cyprus is so extensive and detailed that the truth must somewhere be on record.... Oddly enough, too, their stones provided true sometimes when they sounded utterly improbable; Andreas, for example, in describing ancient Cyprus to me produced a home-made imitation of a hippopotamus walking around and browsing in my courtard which was worthy of Chaplin. It was nearly a year before I caught up with the report of the dwarf hippopotamus which had been unearthed on the Kyrenia range: a prehistoric relic. It was only justice, I suppose, that I myself should be disbelieved by them. (Durrell 1986 [originally 1957], Bitter Lemons of Cyprus, pp. 94–95)