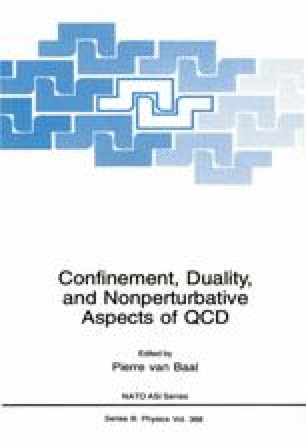 Confinement, Duality, and Non-Perturbative Aspects of QCD pp 379-386 | Cite as

By construction, renormalized non-Abelian gauge theories do not allow for point-like magnetic charges. However, a procedure exists called ‘the Abelian projection’, that transforms these theories into apparently non-renormalizable Abelian theories with magnetic point charges. The small-distance treatment of magnetic charges in gauge theories differs completely from that of electric charges. Yet the effects of these charges, in particular in the infrared region, are very similar. This is expressed in the notion called ‘duality’, and allows one to predict the possibility of exotic confinement modes, ‘oblique confinement’. An exact duality relation is shown to exist which applies to electric and magnetic fluxes in a box.

Gauge Theory Gauge Group Magnetic Flux Gauge Transformation Magnetic Charge
These keywords were added by machine and not by the authors. This process is experimental and the keywords may be updated as the learning algorithm improves.
This is a preview of subscription content, log in to check access.