Applications of Digital Signal Processing to Audio and Acoustics 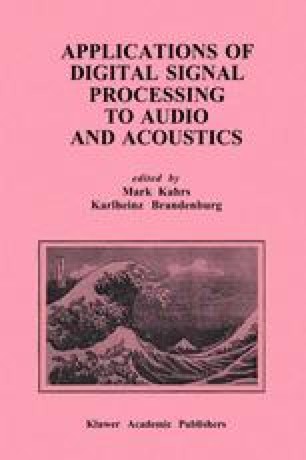 Chapter
Part of the The International Series in Engineering and Computer Science book series (SECS, volume 437)

Basic principles of digital waveguide modeling of musical instruments are presented in a tutorial introduction intended for graduate students in electrical engineering with a solid background in signal processing and acoustics. The vibrating string is taken as the principal illustrative example, but the formulation is unified with that for acoustic tubes. Modeling lossy stiff strings using delay lines and relatively low-order digital filters is described. Various choices of wave variables are discussed, including velocity waves, force waves, and root-power waves. Signal scattering at an impedance discontinuity is derived for an arbitrary number of waveguides intersecting at a junction. Various computational forms are discussed, including the Kelly-Lochbaum, one-multiply, and normalized scattering junctions. A relatively new three-multiply normalized scattering junction is derived using a two-multiply transformer to normalize a one-multiply scattering junction. Conditions for strict passivity of the model are discussed. Use of commutativity of linear, time-invariant elements to greatly reduce computational cost is described. Applications are summarized, and models of the clarinet and bowed-string are described in some detail. The reed-bore and bow-string interactions are modeled as nonlinear scattering junctions attached to the bore/string acoustic waveguide.

Delay Line Vocal Tract Musical Instrument Force Wave Wave Impedance
These keywords were added by machine and not by the authors. This process is experimental and the keywords may be updated as the learning algorithm improves.
This is a preview of subscription content, log in to check access.