Modernization of Government Governance in China 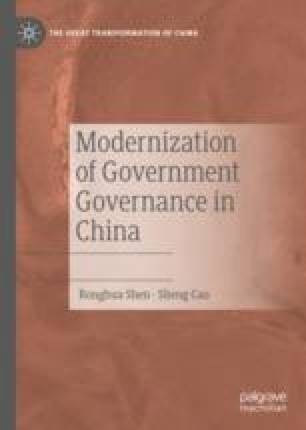 Modernization of Government Governance in China pp 147-169 | Cite as

The new central government takes the reform of administrative approval system as the sally port and priority to promote government function transformation and build a finite and active government by system innovation and practical policies and measures. Oriented toward “clear power division among government, market and society”, the government endeavors to construct a multi-party integrated governance mechanism comprising government, market and society. The reform centering around administrative approval system places emphasis on “reduction” and “deregulation” and aims to withdraw government forces from the market, return power to the market and society, and build a finite government by system innovation. At the same time, government reform should also ensure the efficiency of work. Local governments and all social groups are supposed to reinforce the capacity to undertake functions deregulated by the central government, innovate the mode of management and intensify affairs supervision so as to build an efficient and active government. Government powers should be properly restricted and expanded. In short, for progressively promoting the favorable interaction between government and market as well as government and society, governments at all levels should deregulate partial powers and perform due responsibilities.