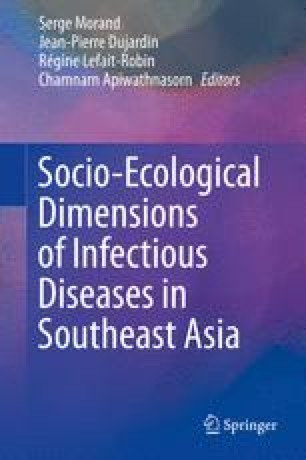 Global changes affect host-pathogen interactions, through the modification of the epidemiological environment (climate, land use, biodiversity), leading to new and sometimes unexpected risks. Epidemics, emergence and re-emergence of infectious diseases are outcomes of these changes, and they constitute serious global threats for health. Although some local emergences have a potential for global threat (i.e. SARS, avian influenza, etc.), most of infectious diseases affect rural and poor populations particularly in developing countries, which are particularly vulnerable to the consequences of global change. Southeast Asia is both a hotspot of infectious emerging diseases of potential global pandemics and of biodiversity, particularly at threat due to dramatic changes in land use (Morand et al. 2014). These may explain why international organizations, developmental agencies and non-governmental conservationist organizations have specially focused on Southeast Asia. Infectious diseases are still a major concern in most Southeast-Asian countries (Coker et al. 2011).

Avian Influenza Fragmented Forest Global Threat Epidemiological Environment Burkholderia Pseudomallei
These keywords were added by machine and not by the authors. This process is experimental and the keywords may be updated as the learning algorithm improves.
Download chapter PDF

Abstract Global changes affect host-pathogen interactions, through the modification of the epidemiological environment (climate, land use, biodiversity), leading to new and sometimes unexpected risks. Epidemics, emergence and re-emergence of infectious diseases are outcomes of these changes, and they constitute serious global threats for health. Although some local emergences have a potential for global threat (i.e. SARS, avian influenza, etc.), most of infectious diseases affect rural and poor populations particularly in developing countries, which are particularly vulnerable to the consequences of global change. Southeast Asia is both a hotspot of infectious emerging diseases of potential global pandemics and of biodiversity, particularly at threat due to dramatic changes in land use (Morand et al. 2014). These may explain why international organizations, developmental agencies and non-governmental conservationist organizations have specially focused on Southeast Asia. Infectious diseases are still a major concern in most Southeast-Asian countries (Coker et al. 2011).

This book emerges from a symposium organized in Bangkok in October 2011 at the Faculty of Tropical Medicine of Mahidol University and supported by the IRD, and its main objective was to join scholars in history, sociology, law, ecology, epidemiology, medical entomology, veterinary sciences, physicians and environmental sciences to present a multidisciplinary overview about the links between environment, biodiversity and human health, mostly through infectious diseases.

The first part of this book concerns infectious diseases and societies from historical times to present days. This part starts with Chap.  2 on how Chinese classics of medicine and medical records referred about epidemic febrile diseases. As Dominique Buchillet emphasizes along with famine due to crop failures and other calamities, epidemics exerted a heavy burden on Chinese populations throughout the ages. The chapter reviews the evolution of medical perceptions on epidemic diseases through these Chinese classics, stressing the importance of the growing awareness of variations in environments and the refashioning of discourses and practices relative to epidemic diseases in Chinese medicine.

In the third chapter, Malee Sitthikriengkrai and Chayan Vaddhanaphuti describe the history and responses to HIV/AIDS in Thailand from a sociocultural perspective. As persons living with HIV had a way to interpret the meaning of their problem, the authors show how they took power into their own hands through the formation of self-help groups and through redefining the way they lived with the disease.

Bernard Moizo in the fourth chapter discusses the issue of infectious diseases in relation to social and environmental global changes. Using the example of growing tourist activities as one possible agent of diseases spreading, the author suggests several ideas that could enhance the development of interdisciplinary approaches despite long-time obstacles.

The second part of this book deals with socio-ecosystems (water and soil) and health, putting the emphasis on environment. In Chap.  5, Séraphine Grellier and colleagues evaluate the contamination in trace metal element (TME) related to the Mae Thang Reservoir. They study the transfer of the TME between the different compartments in and downstream of the reservoir. In particular, they show that upstream areas contributed to bring TME in the Mae Thang Reservoir and that TME concentrations in fishes were thus affected and should be controlled. Finally, they conclude that accumulation of TME in soils of paddy field due to the use of pesticides and fertilizer may increase contamination of rice in the long term.

Chapter  6 concerns local community perception on water and health. Vincent Herbreteau and colleagues report the results of a questionnaire-based survey conducted to assess the exposure of households to potential water pollutions in order to better understand their behaviour regarding the use of water and recourse to health services. This study focusing in localities upstream and downstream of the Mae Thang Reservoir (see Chap.  5) stresses both economic inequalities and lack of surveillance.

The last chapter (Chap.  7) of this first part reviews the results conducted on melioidosis, a tropical disease caused by a soil-dwelling bacterium Burkholderia pseudomallei transmitted from contaminated soil or surface water, in Laos during two intensive campaigns. An important finding emphasized by Yves Buisson and his colleagues is that, because a high proportion of water samples were positive downstream of a heavily contaminated terrestrial site, contamination by water runoff from land reservoirs is likely to be of epidemiological importance.

The third part of this book includes contributions on how climate change and land use change are affecting the ecology and distribution of mosquitoes and particularly those that are vectors of major infectious diseases such as malaria, dengue and chikungunya.

In Chap.  8, Ranjan Ramasamy and colleagues stress the importance of physiological adaptation of mosquitoes to brackish water. Anopheles culicifacies (vector of malaria) and Aedes aegypti and Aedes albopictus (vectors dengue and chikungunya) can develop in brackish water collections in coastal areas of South and Southeast Asia. They may cause serious new threats as their populations can expand in these coastal zones with climate change and rising sea levels due to global warming.

Hans J. Overgaard, Wannapa Suwonkerd and Jeffrey Hii describe in Chap.  9 the effect of land use on malaria vector density, species diversity and insecticide resistance in northern Thailand. They emphasize on the use of landscape analysis as a tool in vector control strategy development and show that an increase in landscape diversity, particularly forest fragmentation, reduces malaria vector diversity and density. Their chapter argues for an intersectoral collaboration between the public health and agricultural sectors, to develop and implement integrated pest and vector management (IPVM) strategies and insecticide resistance management plans.

In Chap.  10 Padikkala Kandiyil Sumodan and his colleagues compare the mosquito fauna in rubber plantations from Thailand and India and contrasted it with mosquito fauna in fragmented forests from Northern Thailand. They observed that in both rubber plantations and forests, Aedes albopictus was the most frequent mosquito. The use of geometric morphometrics tools allowed to distinguish the populations, potentially invasive, in rubber plantations from the ones, potentially native, in fragmented forests. Rubber plantations (RP) in Asia represent millions of artificial breeding sites for dangerous mosquitoes: they could be responsible for the drastic increase and recent planetary importance of Aedes albopictus populations.

Monitoring, data acquisition and also data banking are the subjects of the fourth part, which starts with Chap.  11 on the need to rescue epidemiological data. Marc Choisy and his colleagues presented the aims of modelling epidemiology and their roles for public health. They further emphasized how public health data that have been extensively collected in many parts of the world can be exploited in an efficient manner. With the support of Bill & Melinda Gates Foundation-funded Vaccine Modeling Initiative, they presented some achievement on dengue fever in Southeast Asia.

In Chap.  12, Edi Prifti and Jean-Daniel Zucker illustrate the growing applications of next-generation sequencing (NGS) technologies to human health. They discuss some of the challenges faced by metagenomic data acquisition and their subsequent analysis. The chapter concludes with the idea that there are significant benefits in building capacities for developing high-level scientific research in metagenomics in developing countries.

Claire Lajaunie and Serge Morand, in the last Chap.  13 of this fourth part, summarize some of the outcomes of the project Pathogen Diversity in Southeast Asia (PathodivSEA). They emphasize the importance of advancements in barcoding, biobanking and e-banking, which favour data, samples and knowledge sharing. A particular attention is given on the ethical and legal norms as well as industrial and economic standards that could overlap.

Three chapters are included in the fifth part dealing with the management of health risks.

Marion Bordier and her colleagues, in Chap.  14, describe the methods of prioritization of diseases as an essential tool for policymakers in charge of allocating resources for surveillance and control programmes. They present an innovative way based on the use of an electronic-based questionnaire, as a method to identify criteria allowing differentiations among zoonoses and their impacts in Southeast Asia.

In Chap.  15, Muriel Figuié and Stéphanie Desvaux document the logics underpinning the management practices of farmers facing an emerging disease. They explore how Vietnamese farmers responded when called upon to collaborate to the international fight against the virus H5N1. The results of their survey showed that local management of the disease did not (and cannot) fit with the precautionary approach promoted by the international community.

Alexandre Bouchot and Marion Bordier, in Chap.  16, present the strategy of one major actor of the international community, the World Organization for Animal Health (OIE). Among others, OIE promotes strong partnerships, notably with FAO and WHO, with regard to two topics that require a strong multi-sectoral collaboration at all levels because of their social, economical and ecological determinants: rabies and antimicrobial resistance.

The last part of this book includes contributions on new approaches for developing new strategies for health, societies and environment.

In the first chapter (Chap.  17) of this last part, Valérie Boisvert and her colleagues overview the concept of ecosystem services formed at the interface of science and policy, where it was grounded neither in ecological nor in economic theories. This concept is questioned on how a sustained market development can maintain a harmonious combination of human activities and environmental protection. Finally, the authors conclude that the notion of ecosystem services does not provide an adequate framework to deal with vulnerability and risk.

In Chap.  18, Angela Yang, Peter M. DiGeronimo and Alexandre Azevedo emphasize that the state of our ecosystems is integral to the conservation and sustainable management and that the health of the environment cannot be segregated from our own health. This needs to examine health from a global stance through holistic strategies as “One Health”.

In the last chapter (Chap.  19), Aurélie Binot and Serge Morand suggest that the lessons learnt from several community-based, participatory and adaptive management initiatives could be promoted in the frame of a “One Health” approach’s implementation. This will improve risk communication and help turn rhetoric into reality.

We hope this book will be stimulating and that students and researchers in health in Southeast Asia (and more broadly in Asia) will find in it examples and encouragement to get a broad perspective, to integrate multidisciplinary approach and to favour cross-sectoral exchanges.