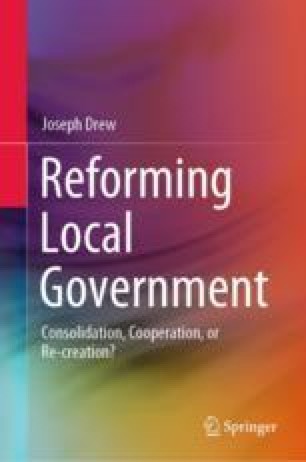 A Comprehensive Theory of Local Government

Buchanan and others have suggested that greater decentralisation of government can constrain Leviathan. In the following table I present some statistics that seem to suggest that greater decentralisation, may in fact, be associated with greater budgetary expansion. I follow the method employed by Oates (1985) and calculate the spearman correlation between various measures of size of government (revenue take, tax take, and debt) and the degree of decentralisation (share of expenditure by local government). Spearman correlations gauge the degree of association between ranks of pairs of data and is appropriate for non-linear monotonic data. Most of the results in Table 3.1 are positive and statistically significant, which suggests that as decentralisation of government grows, so does Leviathan. A reasonable conclusion from this data is that decentralisation may not be a solution to Leviathan and may instead replace a Leviathan central government with lots of local Leviathans.
Table 3.1