The History of the Contractual Thoughts in Ancient China 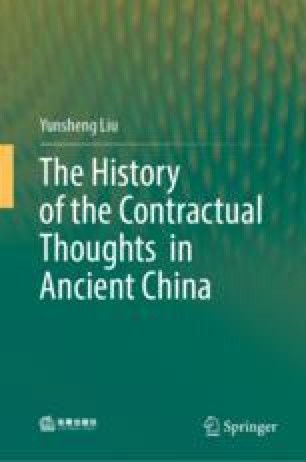 The Flag of Desires: The Humanity Basis of Contract and the Evolution of Contractual Rights

Malinowski holds that the decisive factor of culture came from human’s basic physiological needs and the derived social needs, which were sometimes regarded as certain means. In the light of the comparison between Chinese and western theory of human nature, it seems that we can find a clear and strong progressive line between man’s physiological needs and social needs, that is, human beings set up various social desires to satisfy their natural desires and the need for the satisfaction of both kinds of desires has generated social concepts such as education, law, morality and social groups like economic organizations. The core of this chapter explores the humanity basis and social foundation of contracts based on the comparison of Chinese and western ideas of the evil of human nature, and finds out different qualities and causes of Chinese and western contract culture. Western contract culture focuses on the satisfaction of human desires. Therefore, the contract takes individual rights, freedom and equality as the core, and the sociological and economic theories guiding contracts are the so-called “rational person” or “enterprise spirit” and the “natural obligations” of the government and state to protect the right to freedom. On the contrary, the contract spirit of traditional Chinese culture puts emphasis on restraining or even offsetting individual desires with “rite”, “law” under the premise of satisfying individual desires, and thus guiding them with the ethical concept of “mutual aid” for both families and the society. In terms of contract spirit, Chinese and western cultures tend to be two extremes due to different values and institutions. Western countries advocate freedom of contract and individual rights, regarding them as the “natural obligations” of the law and government; whereas those of China are weakened or even replaced by the parental authority of “common good” (families and clans, the state). However, the traditional culture of “rite” and “law” did not completely block the path of realizing human desires, and individual desires always existed and grew under the waves of family and royalty histories. With the passage of time, contractual rights have grown constantly and become an independent form of right in the era of the Republic of China. Conversely, western freedom of contract was hindered in the early 20th century when individual rights and contract freedom evolved to socialization, aiming to safeguard social public interests and good customs. In conclusion, the spiritual changes of Chinese and western contract culture have been in continuous recurrence and development with their respective historical and cultural foundations, embodying different directions of Chinese and western cultures.

Cite this chapter as:
Liu Y. (2020) The Flag of Desires: The Humanity Basis of Contract and the Evolution of Contractual Rights. In: The History of the Contractual Thoughts in Ancient China. Springer, Singapore