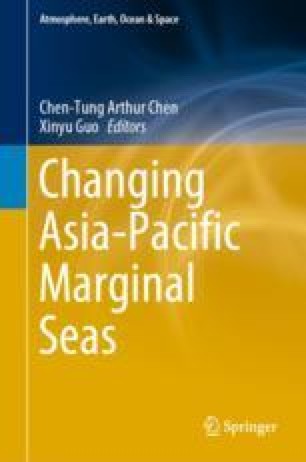 Long-term trends, along with various time-scale variations in the physical properties, in the East China Sea (ECS) are summarized. Long-term variations in sea surface temperature (SST) shows a clear trend after the year 1900 with a 1.2 °C per century variation. However, it includes relatively shorter interannual to multi-decadal time-scale variations. The SST increase rate is more distinct in winter than in summer. The Kuroshio is the most dominant oceanographic feature in the ECS, and it exhibits long-term variations. The Kuroshio volume transport in the PN section located in the central ECS, is known to have a slight long-term increase in 55 years after 1955. The expansion of Changjiang Diluted Water also shows long-term variations associated with climate indices caused by not only the amount of river discharge but also the movement of surface water driven by wind fields in the ECS. One of the symbolic factors related to global warming is sea level, and clear long-term variations in the sea level are found in the ECS, whereas the vertical land motion is noted using tide-gauge data. The long-term variation in the sea level is significantly correlated with climate indices particularly with the relatively regional wind fields.