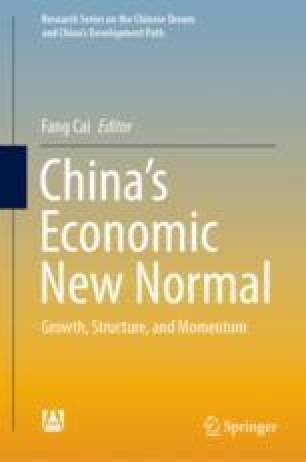 I shall begin this discussion on the productivity of the Chinese economy with what is called the “new normal.” Almost overnight, everyone is talking about the new normal, and some economists have even jokingly suggested that it be taken as an economics course in universities.

This chapter is based on a report given at the international symposium, “China’s New Normal: Growth, Structure, and Momentum,” organized by Chinese Academy of Social Sciences. In 2014, the English version of this report was presented at the Third World KLEMS Conference and the Asia-Pacific Productivity Conference (APPC), as well as symposiums hosted by Peking University, Nankai University, the CASS Institute of World Economy and Politics, the China Comparative Economics Association, the Organization for Economic Cooperation and Development (OECD), the Centre d’Etudes Prospectives et d’Informations Internationales (CEPII), and the Asian Development Bank (ADB). The author truly appreciates the constructive criticism and comments received at these meetings. Part of the report was published in Comparative Studies (Volume 69, 2013) as “Measuring and Interpreting Total Factor Productivity in Chinese Industry.” The current version has omitted the mathematical derivation of the empirical studies, and for data cited herein, it only provides the source of relevant publications. The author takes full responsibility for the content.