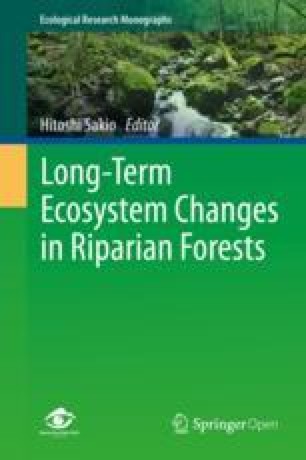 Avifauna at Ooyamazawa: Decline of Birds that Forage in Bushy Understories

The breeding and wintering bird fauna at Ooyamazawa were monitored by point counting every year from 2010 to 2017. The abundance of bird species that feed in bushes, including the Japanese Bush Warbler (Cettia diphone) and Siberian Blue Robin (Luscinia cyane), decreased. On the contrary, the other bird species that feed in habitats other than bushy understory did not decrease significantly. In Ooyamazawa, deers have serious impact on the understory vegetation. Thus, deer browsing likely affected the number of birds using the understory vegetation.

The “Monitoring Sites 1000 Project” was launched by the Japanese Ministry of the Environment to monitor the natural environment in Japan. Birds are an important monitoring target taxon in the project because they are easy to survey, and a database on their past populations is available. The bird database provides important information on the changes in abundance, species composition, and relative distributions in the birds’ habitat. Therefore, starting in 2010, I started a bird survey project in Ooyamazawa.

In this section, I will describe the features of the avifauna at Ooyamazawa’s riparian forest and the impact of deer browsing on the avifauna during eight years of monitoring.

11.2 Characteristics of Avifauna at Ooyamazawa

11.2.1 Effects of Topography and Climate on Bird Fauna

The survey points in Ooyamazawa were located in the north-facing slope of a valley. The environment was cold and harsh, especially in winter. This may have been a factor affecting the avifauna of this study site.

I compared the avifauna of Ooyamazawa with that of the University of Tokyo Chichibu Forest (University Forest) situated on a southern slope about 5 km away from Ooyamazawa to compare the environmental effect. The University Forest is located at an altitude of about 1200 m and is covered by a deciduous broad-leaved forest dominated by Fagus japonica and F. crenata mixed with Tsuga sieboldii. The forest floor had once been dominated by Sasa borealis before deer browsing intensified. Currently, the forest floor is mostly denuded except for sporadic patches of Pieris japonica, which deers do not eat.

The study site at Ooyamazawa is covered with about 30 cm of snow in winter because of its location on the northern slope of a valley. On the other hand, the University Forest is located on the southern slope, which has little snow cover except during snowfall events.

In Ooyamazawa, the decrease in the abundance of ground-feeding birds in winter may be explained by the difficulty of feeding on snow-covered ground. On the other hand, because the University Forest is relatively free of snow, the ground-feeding birds over-wintering in this site may find it relatively easier to forage on the ground. The reason that the abundance of tree stem-feeding birds in Ooyamazawa did not change through the breeding and wintering seasons may be because tree stems are hardly affected by snow cover and thus continues to provide a foraging microhabitat throughout the year.

Noise masking is a process that interferes with the use of acoustic signals that are critical to many bird species (Brumm and Slabbekoorn 2005; Francis et al. 2009). Therefore, birds living in areas exposed to anthropogenic noise may experience reduced reproductive success, which may ultimately lead to the exclusion of species from an otherwise suitable habitat (Slabbekoorn and Ripmeester 2008). Because stream noise is also thought to affect the avifauna, I studied the effects of stream noise on the local bird distribution during the breeding and wintering seasons between 2009 and 2012 in Ooyamazawa. In the breeding season, acoustic signals are especially important because they are used to establish and defend territory, and to provide cues for mating. Therefore, stream noise is expected to have a greater effect on the local bird distribution. I established three study sites, each of which included survey points with (50.3–57.9 dB (A)) and without stream noise (35.0–40.1 dB (A)). I then counted the abundance of birds of each species within a radius of 50 m. Each study site was similar in terms of vegetation type and density. The sound levels (sound pressure waves) at each survey point were characterized by their frequency and decibel range on an unweighted decibel scale. Sonograms for each bird species encountered were created from data obtained during the study.

During the breeding season when song communication is important, Sakhalin Leaf Warblers (Phylloscopus borealoides) were significantly more abundant in the sites with stream noise, but Eurasian Nuthatches (Sitta europaea) and Coal Tits (Periparus ater) were significantly more abundant in the sites free from stream noise (Fig. 11.3). The numbers of Eurasian Wrens (Troglodytes troglodytes) and Blue-and-White Flycatchers (Cyanoptitla cyanomelana) did not differ significantly between the two types of sites. In the wintering seasons, however, the numbers of S. europaea, P. ater and Willow Tits (Poecile montanus) did not differ significantly between the sites with and without stream noise (Fig. 11.3).
Phylloscopus borealoides and T. troglodytes sang at frequencies higher than 6000 Hz (Fig. 11.4); thus, they were little affected by the stream noise, because the sound pressure of stream noise was reduced at sound frequencies above 6000 kHz (Ueta 2012). On the other hand, S. europaea and P. ater sang at frequencies lower than 6000 Hz. Therefore, the songs of these two species were greatly affected by stream noise.

Except for the stream noise, the general features of the environment in each study site were similar. It is likely that bird species that sing in the frequency range overlapping the loudest stream noise moved away from the noisy stream during the breeding season when song information is critically important for them. Birds that sang in a higher frequency seemed either to prefer the stream-side locations or to remain on the stream-side sites where the competition is low.

Although it is possible that bird sounds were unrecognizable due to the loud stream noise, the range of recorded sounds was only within 50 m; at this range, it has been confirmed that the observer can easily hear bird songs even in the presence of loud stream noise. Therefore, the effect of stream noise is more likely the result of a behavioral shift in birds rather than error on the part of the observers.

Many aquatic insects emerge along the river (Murakami 2001), which are an important food source for birds in the season when trees are without leaves. In Ooyamazawa where the bud-break occurs late, the tree leaves were not open during the study’s breeding period. Therefore, the abundance of leaf-feeders such as Lepidoptera larvae was likely low, which adds to the importance of emerging aquatic insects from the stream as the major food source for birds that forage for flying insects. If the availability of food for specialized insectivorous birds is more favorable on the stream-side, then it is possible that P. borealoides occurs more frequently in sites with stream noise even at the cost of the stream noise interfering with bird communication. However, for other bird species that do not benefit from flying insects, there is a cost to living in the stream-side, and thus these species are less abundant.

These results suggest that stream noise affects the avifauna of Ooyamazawa in the breeding season by hindering communication through song.

11.3 Decrease of Bird Species that Feed in Bushes

In Ooyamazawa, the forest understory, especially Sasa borealis, has decreased due to the impact of browsing by Sika Deer (Cervus nippon) since 2000 (Sakio et al. 2013, Chap.  8). To investigate the impact of browsing by C. nippon on avifauna, I analyzed the population trends of the 15 most common bird species that were recorded in more than 20 surveys. Population indices and long-term trends for each species were calculated using TRIM (Trends and Indices for Monitoring data, Package “rtrim 2.0.4” Bogaart et al. 2018).

The abundance of bird species that feed in bushes, namely the Japanese Bush Warbler (Cettia diphone), Siberian Blue Robin (Luscinia cyane), Japanese Robin (Luscinia akahige), and Red-billed Leiothrix (Leiothrix lutea) decreased significantly during the 8 years of monitoring (Fig. 11.5). By 2017, these birds had almost completely disappeared from the study site. The abundance of bird species that nest in bushes, namely P. borealoides and the Eastern Crowned Willow Warbler (Phylloscopus coronatus) also decreased, but they were still observed in 2017.
On the contrary, the other bird species that feed in habitats other than bushy understory did not decrease significantly (Fig. 11.6). The levels of the White-bellied Green pigeon (Treron sieboldii), T. troglodytes, and C. cyanomelana increased significantly.

After the loss of the Ooyamazawa forest understory, especially S. borealis, due to the impact of browsing by C. nippon, S. borealis experienced a bloom in 2013. After this, however, the remaining S. borealis died and have not revived since then. Therefore, the decline of bush-habitat birds, especially from around 2013, was likely caused by heavy deer browsing and the blooming-dieback phase of S. borealis. Similar declines in bird populations that feed in bushes have been observed in other forests in Japan that have experienced heavy deer browsing pressure (Hino 2006, Ueta et al. 2014).

Phylloscopus borealoides and P. coronatus that feed in the tree canopy and nest in bushes decreased but were still observed in 2017. These birds are less dependent on the forest understory compared to the bush-specialist species; thus, they have continued to inhabit the site.

Since the cessation of most forestry efforts in the 1970s, Japanese forests have matured. Therefore, at a nationwide scale, the abundance of bird species that depend on mature forests have also increased (Yamaura et al. 2009). Although summer visitor species experienced a rapid decline once in the 1980s and again in the 1990s (Higuchi and Morishita 1999), their populations are currently undergoing a restoration (Ueta 2016). This current general situation of Japanese forests may explain the significant increase in the populations of T. sieboldii and C. cyanomelana, as well as the stable population trend of other species.

The understory vegetation of the University Forest, located on a southern slope about five kilometers away from Ooyamazawa, was once also heavily affected by deer browsing. As a consequence, the former S. borealis understory is currently being replaced by Pieris japonica (Ericaceae), a species that deers do not eat. A similar change may occur in Ooyamazawa. The abundance levels of some of the birds using the forest understory will likely recover in response to these changes, although some species will not be able to respond. Since this is an ongoing process, it would be interesting to see what happens in the future through continued monitoring of the avifauna.