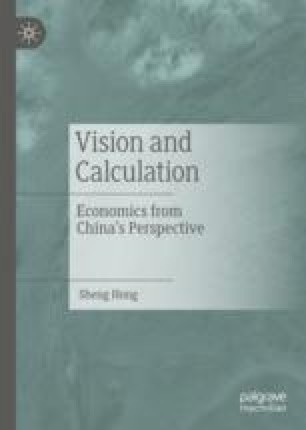 The main objectives of this chapter are to explain the origination, development, density, scale determination, and industry positioning of cities using the concept of transactions and to discuss the impacts of institutional changes and policy improvements on cities. Statistically, transactions can bring about transaction benefits. Pursuing transaction benefits leads people to congregate, which may yield congestion externalities and market-net externalities, and their differences form the congregation rent. Population density may reach the optimal equilibrium when the congregation rent corresponding to the population density is at its maximum, which determines the economic density and scale of the city. The time distribution of the city’s growth process is similar to the economic income change corresponding to the change in population density because the people’s incentive to swarm into cities is proportional to the benefits that they may receive from cities. A larger economic scale results in a stronger congregative effect. Different industries may position from the center of the city to the outside according to their congregative effects from higher to lower that depend on the different optimal economic scales of different industries. Finally, the decrease in non-market transaction costs brought about by institutional changes may affect the density and scale of cities through an impact on the volume of transactions; policy changes may also affect transaction costs and the density and scale of cities. However, such effects may not be as obvious and sustainable as institutional changes.

This chapter reflects the author when taking charge of an urban planning project under the auspices of the Unirule Institute.

Assume that the city is a circle, and the commuting population lives outside the city and enters the city when going to work or shopping. According to the city’s highest population density per square kilometer and considering the proportion of people living in and outside the city, we assume that Nin (100 people) enter the city center from outside. The transport resources are the areas covered by roads, and transport resources are assumed to be the circumference of the circle of any radius from the center of the city. When people move from outside to the city center, the radius to the center is smaller, and the circumference (transport resources) is decreasing, but the number of people is not reduced, which leads to congestion. See the following figure.

In fact, obtaining the population per square meter in a downtown area is very difficult because, in the absence of data for congestion externalities, we cannot determine the city center at equilibrium and its population density. Nonetheless, in the end, multiple iterations can achieve this information.

However, the congestion has not only linear proportional relations to the reduction in the number of transport resources per capita but also non-linear reduction relations. Therefore, we need to add an index associated with population density, which we call the congestion coefficient, and it is represented by h:
$$ \mathrm{Congestion}\ \mathrm{Externalities}={\mathrm{N}}_{\mathrm{in}}/\left[2{\left( N\pi /n\right)}^{0.5}\right]\ast {\mathrm{n}}^h $$

As previously mentioned, when the economic density is low, the market-led congregation speed is slow; only when the density reaches a certain point will the effects of the market increase. Therefore, if during the startup stage the government promotes urban districts to cross the tipping point earlier through policy and other operations, such as utilizing its influence to attract direct investments and to move in public institutions, doing so would also develop the city. However, this governmental role should not be overestimated. Table 6.4 assumes that, through government policies and operations, an urban district reaches 3000 people per square kilometer at the outset of economic development, and the contrast situation is one without these promotional procedures (Fig. 6.22).
Table 6.4

This chart shows that the government’s initial push has an obvious impact in the first years, reaching up to a maximum of 55% of the GDP (2013). However, it decreases later and has almost no effect after ten years. Additionally, in this model, we do not count the cost of government promotion in industrial congregation policy.

We will consider a 10% subsidy of the housing rates, which is also equivalent to a permanent 10% rental subsidy. Table 6.5 and Fig. 6.23 represent the effect of the housing rent subsidy policy.
Table 6.5

Figure 6.23 shows that, although the impact of subsidizing rent is not very significant—usually at approximately 4%–5%—its effects last long and eventually bring a certain increase in total GDP.

The administrative departments may lead or support enterprises or civil organizations to establish industrial alliances or associations or to support these industries by purchasing their products. The supporting policy can be implemented for ten years. After that, industry alliances and associations develop and operate by themselves. The assumption is that the results of this policy reduce transaction costs (1% of total value added).

Figure 6.25 shows that this policy has played a role; however, relative to other policies, the effect is not significant but is very efficient compared with the input. Furthermore, this result is only a static analysis. From a dynamic perspective, if this policy develops relatively mature industry associations and industry alliances, it will bring long-term benefits.

Cite this chapter as:
Hong S. (2020) Transactions and Cities. In: Vision and Calculation. Palgrave Macmillan, Singapore