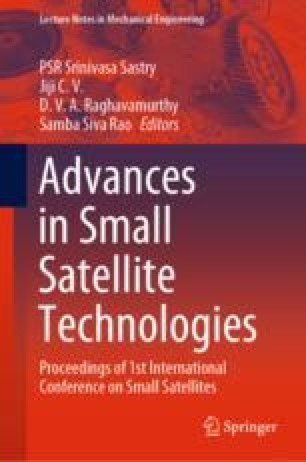 The continuous communication link to the ground station is the prime requirement of any space mission. Presently, the LEO is primarily used for remote sensing, science, and human in space program. The visibility of the low Earth orbit (LEO) to the ground station is limited for a maximum of ~20 min, with four to five orbital visibilities over a day. This requires a huge network of ground stations. About two-third coverage of the orbit of LEO satellite is possible, with about 40 stations located geographically over different places on the globe. The most of the Earth’s surface is covered by water; a majority of ground stations need to be located on ships resulting in exorbitant costs of the ground network. Data relay satellite system with three satellite geosynchronous orbit (GEO) presents a very elegant solution in this context and provides a stable link between satellite in LEO and ground station. In the global scenario, the evolution of Tracking and Data Relay Satellite System (TDRSS) is developed by NASA to support communications and tracking services for its LEO spacecraft. The modern space technologies with low-cost microelectronics and microelectromechanical systems (MEMS) technology have enabled building small satellites in a short time. They have the advantage of low mass, low power consumption, low cost, and quick accessibility to space with launch-on-demand services. Small satellites have successfully demonstrated ground satellite and inter-satellite laser communication, which transmits data bit rates orders of magnitudes greater than the radio communication. The efforts are being made to design onboard controller as a generic 6-DOF control system capable of autonomous orientation, orbit, and formation control of multiple satellites in orbit. We use the small data relay satellites at GEO to keep in contact with LEO satellite for continuous data transfer coverage and better navigation accuracy.