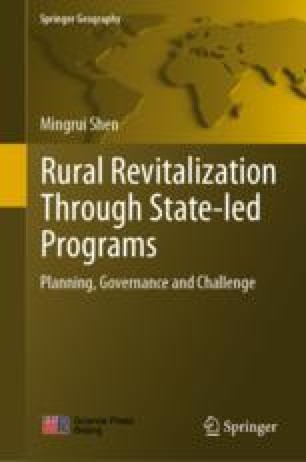 The recent national strategy of “rural revitalization” clearly demonstrates such central directives on rural issues. The state is regaining its leading role in rural governance by introducing package of state-led programs. To reach the research objectives, four questions are formulated in the study. (1) How does the process of intergovernmental politics evolve on rural program issues? (2) What is the mechanism behind the interplays between the state, private sector, and farmers in rural programs? (3) To what extent is the program-driven governance model a sustainable one? (4) Are there any new theoretical implications for rural revitalization, deriving from the state-led paradigm in China?

The economic might of China’s urban centers has decimated the country’s agrarian communities in recent decades…… Yet not all Chinese are enthused by the country’s seemingly unchecked path toward urbanization …… [There is also] a growing social movement in which urban residents return to fading villages…… [The practitioners] believed that “going back to the land”, or taking control of China’s rapid urbanization , is the next chapter of China’s development.

I [the interviewee] think the government, on the one hand, is supportive of this concept of promoting traditional culture, which can be manipulated into building a ‘Chinese Dream’, or identity. On the other hand, the government is very afraid of losing control and stability . The commune project wants more autonomy in how to organize their community , their living space, their lifestyle , which the government doesn’t really want to relax.