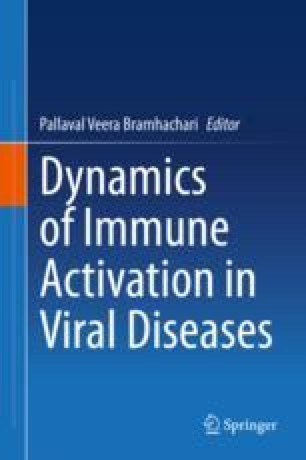 Viral diseases are a major cause of morbidity and mortality and result in a significant public health burden. T lymphocytes first identified in the chordate lineage and constitute a highly sophisticated branch of adaptive immune system. Apart from B cells, it is the only cell type that exhibits antigenic specificities; achieved by gene rearrangement. T cells are unique with respect to diversity of their subsets, which have distinct effector specificities, proliferative abilities, memory generation, and life span. T cells are impactful in viral infections by virtue of their capability to combat intracellular pathogens. The effector functions of T cells are mediated through cytokines/chemokines and by direct cytotoxicity of infected cells. T cell response can be beneficial or detrimental to host; prognosis depending on qualitative and quantitative differences in the response. Persistent viral infections are associated with functionally suboptimal, exhausted T cell responses, which are unable to clear virus. Specific subsets such as regulatory T cells (Tregs) dampen antiviral responses; thereby favouring viral persistence. However, Tregs protect the host from immunopathology by limiting perpetual inflammation. Certain other subsets such as Th17 cells may contribute to autoimmune component of viral infections. The importance of T cells is highlighted by the fact that modern vaccination and therapeutic approaches focus on modulating T cell frequencies and effector functions. This chapter emphasises the understanding how T cells influence outcomes of viral infections, modern vaccination and therapeutic strategies with thrust on T cell biology.

Virus infects host cells if humoral immunity fails, viruses use protein synthesis and replication machinery of host cells for their replication and synthesis of their own proteins. Some newly synthesized proteins may degrade into peptide fragments. If these peptides have sufficient binding affinity, to class I MHC molecules they appear on cell surface of an infected cell as class I MHC–peptide complex. This complex activates CD8+ T cells and induces infected cell apoptosis by releasing cytotoxic granules and production of TNF-α and IFN-γ. Activation of CD8+ T cells also occurs in draining lymph nodes, where antigen-presenting cells (APCs) encounter naïve T cells. Priming of naïve T cells will not only occur through classical pathway via infection of cell, but also through cross-presentation of viral peptides on MHC class I molecules, taken up from extracellular sources. Priming of T cells triggers a massive expansion of antigen-specific T cells. Their progeny usually accumulate in large numbers of armed effector T cells and these normally contribute to the eradication of viral pathogens.

There are more than 8000 cases of respiratory diseases among which the Severe acute Respiratory Syndrome (SARS) is caused by novel coronavirus (SARS-CoV), and contributed to 10% of mortality in 2002–2003. Pro-inflammatory responses enhance disease progression. The mechanism of immune evasion is mainly characterised by poor antigen presentation by antigen presentating cells (Legge and Braciale 2003). The antigen presentation is key for activation of T cell and produces chemokines and cytokines that regulate disease progression (Seder et al. 2008). The immune evasion of novel coronavirus targets APC and suppresses T cell activation. Dendritic cell immunisation activates T cells. As a result, the production of IFN-gamma, IL-2 and TNF-alfa are released (Zhao et al. 2010). Therefore, the viral titre gets reduced as immunisation with Dendritic cells (DC) by T cell activation successfully suppressed viral pathogenesis. It can be characterised as a potent immunogen to activate immune response.

The immune evasion strategy of viruses mainly by producing diversity of viral proteins and enhances viral pathogenesis. The HLA alleles on CD8+ T cell and diversity of viral protein presentation are not uniform in viral pathogenic environment makes the strong presentation of viral pathogenesis (Weiskopf et al. 2013). As a result, T cell activation is suppressed due to less polymorphism of HLA. The T cell cross-reactivity plays an important role in disease pathogenesis. Likewise, disease serotypes fail to provide immune response against later stage secondary infection of dengue virus and unresponsiveness to T memory cells to secondary infection, which are produced in primary infection and it also produces Types 1 and 2 cytokines and responsible for other pathologies (Duangchinda et al. 2011). Therefore, cytotoxic memory T cell enhances viral replication and it is considered as original antigenic sin (Mongkolsapaya et al. 2003). Therefore inorder to combat the strategy was applied to activate CD8+ T cell, as a result IFN-gamma enhances immune response against DENV peptides.

The viral hemorrhage fever (VHF) majorly regulates T cell priming, effector T cell response and T cell activation (Dahlke et al. 2017). Early during VHF, the antigen-presenting cells produce high levels of IFN-gamma and TNF-alfa and IL-6. As a result, activation of T cells increases viremia and overproduction of IFN-gamma and TNF-alfa this results in over activation of T cells (Perdomo-Celis and Salvato 2019) This condition is termed as cytokine storm. During VHF the proportions of regulatory T lymphocytes decreases and therefore, this enhances disease pathogenicity.

There are more than 350 million people infected with the Hepatitis B virus. The virus mainly infects liver and causes chronic and acute pathology. The infection carried commonly by mother to child during birth. The one in all among the viruses, which is a non-retroviruses that uses the host RNA polymerase for its transcription and as a result, the closed circular DNA gets transcribed and involved in the host disease pathogenesis. The adaptive immunopathogenesis plays important role in the disease progression. The liver residing APC plays an important role in the activation of naïve CD4 T and CD8 T cells via cross-priming and facilitates the persistence of the virus (Lan et al. 2016). The downregulation of the TLR-7 and TLR-9 in plasmacytoid dendritic cell and as a result, the IFN signalling is inactivated and cytokines are inhibited (Seeger and Mason 2000). The NK cells are also major cells providing immune to the HBV by expressing death ligand and inactivating the CD4 T cells Bertoletti and Ferrari 2016). The CD8 T cells exhaustion is the major episode in the disease pathology by expressing death receptors such as TIM-3, PD-1 and 2B4, poor proliferative signal, IL-2 and IFN-gamma (Raziorrouh et al. 2010). The CTL apoptosis of CTL by upregulation of various apoptotic genes likewise, Bim and TRAIL-R2. Due to downregulation of T-bet results in exhaustion of the T cells.

Zika virus is mainly infected by mosquito borne flavivirus and it has unexpected links with microcephaly and Guillain–Barre syndrome. It is hypothesised as the infection resultant to the testis damage. The Zika viral infection results in the expression of TIM-4, which is one of the phagocytic markers and facilitates viral replication (Osuna et al. 2016; Zhang et al. 2018). The population of lymphocyte subsets are reduced in the period of infection. The virus getting successfully evading the host immune responses. The current study in combatting the viral immune evasion mainly on designing the RNA vaccines and T cell epitope tetramer for activation of T cells, recombinant vector-based vectors (Zang et al. 2018).

Acquired immunity plays an important role to eliminate the pathogen by activating APC, CD4 T and CD8 T cells. The APC presentation by MHC and the presented processed peptide activates the TCR and CD4 and CD8 associated with MHC stabilises the TCR activation. The TCR activation supported by the co-stimulatory molecules like CD28/B7 activates the T cell proliferation. As a result, the IL-2 and other cytokines and chemokines are released. The TLR’s are the receptors which activates the innate immunity and as a result, the activation of chemokines and cytokines are upregulated and various proliferative signals are activated with the response to the PAMP’s. The naïve T cells, as aresult differentiates into CD4 and further has different subsets like, Th1, Th2, Th17 and T reg. The other CD8 T and memory T cells are prominent cells in elimination of disease. The virus infection evades the acquired immunity and immune responses by various mechanisms. The viral antigen manipulates the host immune responses by inhibiting the proliferative signals, expressing exhausting receptors, MHC restriction and various anti-inflammatory cytokines. The viral proteins upregulate apoptotic genes and inhibits immune responses of T cells. Due to high diversity of viral proteins, the HLA polymorphism is restricted, hence the MHC restriction and MHC cross presentation makes more significant in the viral persistence. The TLR-7 and TLR-9 are majorly downregulated in the HBV and provide immune to the viral propagation. The differentiation of the CD4 Th cells into Regulatory T lymphocytes hinders the immune activation and provide immune-resistance to the virus. In few viral serotypes, the T memory cells fail to respond to the secondary infection. In VHF, the overexpression of cytokines like TNF-alfa, IFN-gamma and IL-6 are responsible for ‘cytokine storm’ and increase viremia and favour in disease progression. The NK cell-mediated immune evasion in cancer causing viruses is unique by causing exhaustion of T cell and therefore, inhibiting immune responses.

There are vast potential targets to design the therapeutic and diagnosing markers for the virus. Recently, immunotherapy is a novel application for treating various virus pathogenicity by PD-1/PD-L1, this infers the overcoming the exhaustion of T cells (Pauken and Wherry 2015). The active T cell induces immune responses against viral titre and resolving the immune evasion of viruses. The tcf1 can be a potential biomarker for the chronic viral infections. The acquired immunity is a potential target to combat against the viral infection. The RNA-based Next-generation sequencing play an imperative role in transplanting the γδ T cell antigen receptors from the human cohort (Utzschneider et al. 2016). Ex vivo application of IFN-gamma is also a potential therapeutic activation of viral immune responses (Turtle et al. 2016). Immunisation of acquired immune responses by activating the DC cells viral peptide and evade the anergic condition (Zhao et al. 2010). The maintenance of antiviral peptides from the healthy infected individuals is the potential strategy for combatting the immune evasion.