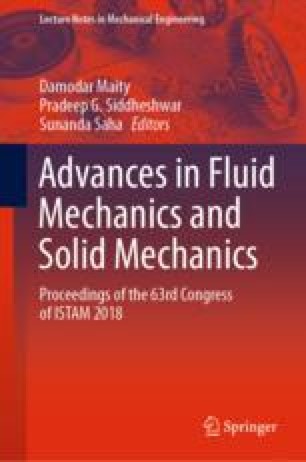 The flow of air around the train in a confined space, i.e., tunnel is different than that of the train moving in an open air. As the train passes through a tunnel, there is a large amount of aerodynamic drag force exerted on the body of the train. There is a compression of the air ahead of the train inside a tunnel due to which large pressure is produced ahead of a train while just behind the tail there is a suction of air due to low pressure at the tail end of the train. The train inside a confined space in a tunnel behaves just like a loosely fitted piston inside a cylinder. Thus, in order to reduce the drag force, train head and tail geometries are modified. This analysis has been done on ANSYS Fluent 14.0 and steady Navier–Stokes (N-S) equations for two-dimensional, axi-symmetric, incompressible flow using standard k-ε turbulence modeling was solved with the help of Fluent 14.0 software to simulate the flow around the train passing inside a tunnel. In this analysis, two observations are done: first, tunnel width, i.e., blockage ratio has been changed from 0.25 to 0.36 (tunnel width from 6 to 5 m) and variation of drag force with the blockage ratio is analyzed. Second, train head and tail geometries are changed to see the variation of drag force on blunt and hemispherical head and tail of the train. This paper suggests that a less blockage ratio is responsible for less drag force on the train. A similar investigation has been performed by taking different shapes of head and tail of the train keeping the blockage ratio same.

The analysis is supported by CAD Laboratory of the Department of Aerospace Engineering and Applied Mechanics of Indian Institute of Engineering Science and Technology, Shibpur, Howrah, West Bengal, 711103, India.