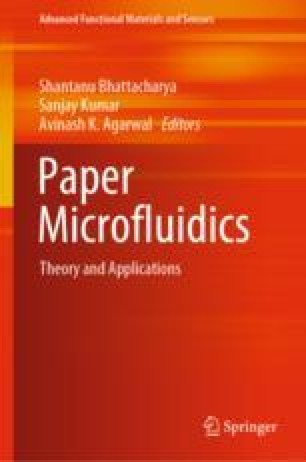 A Historical Perspective on Paper Microfluidic Based Point-of-Care Diagnostics

Paper-based microfluidic systems have emerged as one of the most favorable technologies used in many potential applications such as point-of-care diagnostics, flexible electronics, energy storage, etc. From the past several decades, paper-based technology has readily accepted in the academic research lab and industries as well. The paper-based devices have changed the life of humankind. The distinguishing characteristics of paper substrate like low cost, biodegradability, biocompatibility, and ease of fabrication helped their adaptability in biosensing applications. This chapter gives a concise overview of the historical perspective of paper-based devices, classification of paper types, and their recent applications.

In the past several decades, people have been migrating towards the most developed cities defying all cross-border concerns, making the world a ‘global village’. The significant increase in the interaction between people from across the globe, has led to severe consequences for global health. These worldwide demo-graphical changes have steered the spreading of communicable diseases from one place to another through infected people (McMichael 2000; Pang and Guindon 2004; Tatem et al. 2006). For example, the severe acute respiratory syndrome (SARS), a respiratory viral disease was first recognized in 2003 in Guangdong Province, China and was spread out in over thirty countries within a year (World Health Organization 2003). Zika virus, a vector-borne flavivirus was first isolated in a monkey in 1947 in Uganda and reported in a human in 1953 in Nigeria and since then several outbreaks have been encountered in territories like America, Africa, Asia and Pacific (Hayes 2009; Petersen et al. 2016). Other such examples are the outbreak of human infection with avian influenza A (H7N9) virus in March 2013 in China, the epidemic of Ebola virus disease (EVD) in 2013 in West Africa and the dengue outbreak in Africa (Team 2016).

Conventional approaches used for diagnosis of infectious diseases is hindered by long turnaround times, skilled labor requirements, and sophisticated equipment requirements, imposing a financial liability on the healthcare system. According to a 2015 study by the World Health Organization (WHO), 1.8% of the population pays more than one quarter of their total expenditure on healthcare. Moreover, most of these infectious diseases originate in an underdeveloped/developing region where inadequate medical facilities render their timely diagnosis a difficult task. Due to the lack of proper diagnostic and medication facilities, these diseases claim thousands of human life annually (Lee et al. 2010). In 2003, the Bill and Melinda Gates Foundation in partnership with the National Institutes of Health identified the key challenges of diagnostics as, the lack of appropriate laboratory equipment and shortage of skilled personnel. They emphasized on the development of a simple, accurate, reliable and cost-effective strategy for rapid and point-of-care detection that would facilitate healthcare in resource-limited areas. In the context of early diagnostics of infectious diseases, WHO has released a set of guidelines termed ASSURED (i.e. affordable, sensitive, specific, user-friendly, rapid and robust, equipment-free and deliverable to users) for developing point-of-care diagnostic devices (Peeling et al. 2006).

Point-of-care (POC) diagnostic devices enable the collection of a patient’s health information at convenient locations generally outside of the main laboratory. They are low cost miniaturized systems integrated with complex functionalities facilitating timely diagnosis, health monitoring, clinical management, and dis-ease surveillance in both developing and developed countries (Wang et al. 2016). These devices have played a vital role in addressing global health needs by enabling early disease detection, preventing outbreaks and significantly affecting the medical outcome of disease treatment. According to the Coherent Market In-sights Analysis, the global POC diagnostic market was valued at US$1764.6 million in 2016 and is expected to witness a robust compound annual growth rate of 14.5% over the forecast period (2017–2025).

There are varieties of point-of-care technologies such as flow-through, agglutination assays, solid phase, and paper-based microfluidic device, etc. available in the market. The first three processes have been perceived as one of the most powerful applications owing to their small size, portability, and low volume requirement for samples. Nevertheless, these systems require sophisticated equipment for fluidic handling and other attributes of diagnostic assays such as sample preparation and analyte detection, greatly limiting their usage in remote settings. Among these, paper-based microfluidics is the most widely used technique be-cause of its natural ability to passively transport fluid through capillary action or wicking, eliminating the need for external bulky pump or other equipment. Paper-based platforms possess several other distinguished characteristics such as rapid, inexpensive, ease of use, portability, affordability, low sample volume requirement, faster response, little interference, biodegradability, mass production capability, and external equipment-independent, which fulfills the WHO guidelines for POC (Yager et al. 2006).

From its first invention around 105 A.D. in ancient China (Temple 1998), paper has been used in many application areas. In the early 19th centuries Gay-Lussac developed a litmus paper (Crosland 2004). After that in 1850s to 1950s, researchers have developed paper-based sensors for various applications such as for radial paper chromatography (Weil 1953), urine test (Rocco 2005), detection of dyes and pigments (Müller and Clegg 1949), etc. However, paper-based sensors gained universal recognition after Martin and Synge were awarded Nobel Prize (chemistry) for their invention of paper chromatography in 1952. By the mid-1960s, commercialization of paper-based sensors had started such as, first dipstick assay for glucose detection in human blood, introduced by Ames company in 1964 (Rocco 2005), one-step lateral flow assay for the point-of-care pregnancy test kit launched by Unipath in 1988 (Chard 1992; Davies et al. 2007). Between mid-90s and 2000s, there was a progressive development of paper-based devices for detection of analytes such as diabetes, cholesterol, diagnostics of pathogens, and infectious diseases, etc. There was another major breakthrough in this field when two dimensional microfluidic paper-based analytical device (2D-μ PAD) was introduced by Whiteside’s research group in 2007 (Martinez et al. 2007). Three distinguished branches with hydrophobic barriers made of SU-8 photoresist were patterned on chromatography paper using photolithography process and used for glucose and albumin detection. Since the development of 2D-μ PAD, extensive research has been carried out in device design, performance improvement and their utilization in various point-of-care applications in the past decades (Cate et al. 2014; Kumar et al. 2016a, b, 2017a, b, 2018; Morbioli et al. 2017; Li et al. 2017; You et al. 2017; Yeh et al. 2017; Whitesides 2018).