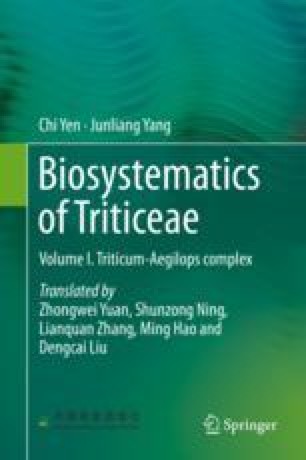 Biosystematics of Triticeae pp 23-30 | Cite as

In the early twentieth century, the British botanist Percival J. and the Soviet botanist Н. И. Вавилов organized worldwide surveys and collections of wheat and conducted cultivation experiments, genetic, breeding, and taxonomic studies. Percival’s viewpoints of classification system were published in The wheat plant, a monograph. He ignored the scientific achievements including cytology at that time, also including his own observation and study, and subjectively classified Triticum into two species and eleven cultivation races. Percival (1921) said that “To these groups I have applied the term ‘race’ rather than the term ‘species’, although they might with equal justice be designated ‘cultivated species’, for the methods used in their grouping and delimitation are same as those adopted in the case of wild species.” He only admitted 2 wild wheat species, but combined the emmer with dinkel wheat and put 11 cultivated wheat under 2 species as cultivated races, namely: