Proceedings of the 11th International Symposium on Heating, Ventilation and Air Conditioning (ISHVAC 2019) 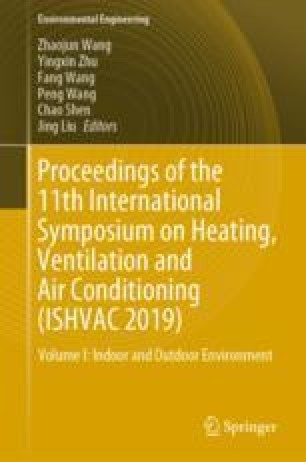 The International Symposium on Heating, Ventilation and Air Conditioning

The underground subway stations have become the targets of terrorism due to the features of staff-intensive and poor ventilation. In the present study, the dynamic mesh model was used to predict the dynamic change of the flow field in the tunnel induced by the train motion. The DPM model was employed to simulate the interaction between the continuous phase of the air and the discrete phase of pollution particles. Accordingly, the dispersion of sudden pollutants released in the ventilation shaft was investigated. The results show that the submicron particles have a good following performance with the air. The dispersion characteristics of the particles highly depend on the unsteady flow field in the tunnel, which is significantly affected by the piston effect induced by the train motion. It can be concluded that particle diffusion experiences three stages: vertical forward and reverse diffusion in the wind shaft, vertical positive diffusion in the wind shaft, and longitudinal stable diffusion in the interval tunnel. It hopes that the study can provide guides for future biochemical protection in the subway system.

Now, terrorists are increasingly rampant and the means of attack are becoming more diverse. Large-scale public buildings, where people spend the longest time, have the highest density of personnel. Sextro et al. [1] simulated the transmission process of the terrorist attack by mail anthrax bacillus in the building; Li et al. [2], using multi-zone airflow model, found that natural ventilation would help SARS virus spread in the building. In the sudden pollution of the ventilation system, Hao et al. [3] analyzed the harm of biochemical attacks in various scenarios and emphasized the possibility and destructiveness of the air-conditioning ventilation system to become the propagating power of biochemical pollution.

In this paper, CFD simulation method is used to reproduce the airflow field caused by piston effect in tunnel, and discrete phase model (DPM model) is used to simulate the propagation and diffusion of pollutant particles and airflow under the coupling action, so as to analyze the diffusion law of sudden pollutants in ventilation shaft.

The simulation study in this paper uses two complex models: the dynamic mesh model and the DPM model. This paper verifies the two models separately.

The model is divided into structured grids. The motion state is given to the whole fluid domain and the wall, and the tunnel surface is set as a non-slip boundary condition. The pressure inlet and the pressure outlet are used at the tunnel entrance and the tunnel exit respectively, and the calculation time step is set to 0.1 s.

Dimensionless u/umax is defined, where u is the wind speed, 0.5 m from the tunnel entrance, and umax is the maximum speed of the train. Figure 1 is a comparison of the simulation results with the experimental results of the literature. The simulation results are in good agreement with the experimental results. Therefore, it can be explained that the CFD dynamic mesh technology can well simulate the natural ventilation of the subway tunnel under train movement.

In the DPM model verification, this paper selects the three-dimensional full-scale room model in the literature [5] to simulate the change of particle concentration in two rooms. Figure 2 is the model used in the simulation.

At the initial time, the particles are evenly distributed in zone-1 space, and the density of the particles is 865 kg/m3. In order to achieve uniform distribution of particles, 800 points were uniformly taken in zone-1 to synthesize a parcel as a source of emission.

The average particle concentration comparison of the two zone-1 regions is shown in Fig. 2. As can be seen from the figure, there is a high degree of consistency between the simulated data and the experimental data. Therefore, the DPM model can be applied for further research.

3.1 Introduction to the Model

The discrete phase model uses the Lagrangian method to describe the particle trajectory. The trajectory of the particle can be expressed as:
$$\frac{{{\text{d}}u_{\text{p}} }}{{{\text{d}}t}} = F$$
(1)
where F is the force of particles. In this paper, the molecular forces that need to be considered in this case include: Saffman lift, drag force, gravity, and Brownian force.

In summary, submicron particles have good airflow follow-up, and the change of airflow field in the tunnel has a great impact on particle diffusion.

In this study, CFD simulation method is used to simulate the diffusion of sudden pollutants in ventilation shaft of subway tunnel during train operation by combining dynamic grid and DPM model. Based on the analysis of pollutant diffusion in tunnels, the following conclusions can be drawn: