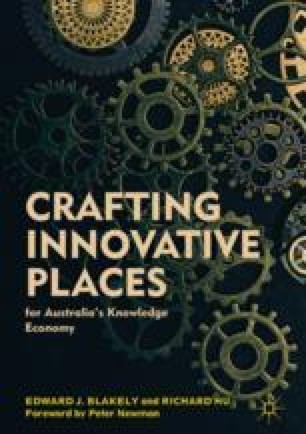 This chapter examines the pursuit of innovation in Australian cities. It begins by outlining the imperatives for pursuing innovation in Australia, recognising the need for an Australian way that is not just an imitation of international best practices, and emphasising the essential role of governments. It particularly points out the importance of translating the Australian government’s innovation rhetoric into effective actions to reverse the downward trend in national innovation inputs and performance. The chapter then introduces several innovative places in Australia’s leading global cities, Sydney and Melbourne, and several recent ‘smart cities’ initiatives in Adelaide and Canberra. These places are important innovation hubs in Australian cities, but none have yet achieved a leading status globally. Finally, the chapter provides a comprehensive examination of the innovative assets of 25 Australian cities through constructing a Knowledge City Index, which reveals their competitive strengths and weaknesses in pursuing innovation.

Appendix: Methodological Note on the KCI

The KCI contains two domains, and each domain contains three indicators with specific measures, as presented in Table 6.2. Of the two domains, ‘knowledge capital’ comprises the knowledge infrastructure and resources that a knowledge economy can draw upon; ‘knowledge economy’ captures knowledge-based activities and prosperity. We used relative weighting and equal weighting to compute the KCI: relative weighting is used for each indicator; equal weighting is used for the overall index. This approach is similar to that used for the Integrated Urban Competitiveness Index in Chap.  3. The measures for the six indicators of the KCI use data from the Australian Census 2011. The original data were in different forms and were standardised for each indicator. Of the 25 cities, the city with the highest value (or best performance) was standardised as 10, while the city with the lowest value (or worst performance) was standardised as 1, and the remaining cities were weighted according to their original values between the highest and the lowest. This standardisation method means that the values for one city’s indicators are relative rather than absolute; that is, their values are relative to the values of the other cities in the group. With a maximum value of 10 and a minimum value of 1 assigned to each indicator, we computed the KCI by aggregating the values of the six indicators. The underlying assumption for the aggregation is that the six indicators are of equal weighting, or importance, in the KCI. Thus, an ‘ideal’ knowledge city could achieve a value of 60 for the KCI.
Table 6.2

Indicators and measures of the Knowledge City Index