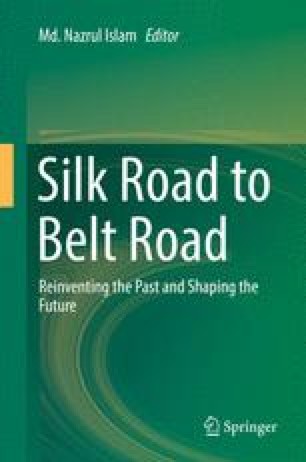 The Belt and Road Initiative (BRI), also known as One Belt, One Road (OBOR), is China’s highly ambitious development project aimed at revitalizing the Chinese ancient Silk Road and realizing the Chinese dream. It was launched in 2013 by Chinese President Xi Jinping. BRI is perceived to have impacts on many aspects of interconnectivity, one of which is trade exchange. Trade between Cambodia and China has become noticeably prominent especially since the first trade agreement signed in 1996. This study carries out the analysis on how Cambodia can intensify and sustain the benefits from so-called bilateral trade in the medium and long term by looking at the China-Cambodia’s trade pattern and constraints facing export and import firms in Cambodia. A descriptive method has been conducted on the secondary data collected. Primary data collection has been carried out during in-depth interviews with representatives from garment factories, construction companies, and logistic firms located in Phnom Penh and Kandal province of Cambodia involving in exports and imports with China. The results show that first of all, trade between Cambodia and China tends to be in the form of intra-industry trade. This is perhaps mainly because of high concentration in a few traded products and very small volume of exports to China. Constraints to trade flows between the two countries, particularly from the Cambodia’s exports to China, have been examined in this study in light of making policy recommendations. Intensification especially of Cambodia’s export to China to enhance its trade balance is needed and can be made possible by improving Cambodia’s supply chain of intermediate goods within the focused traded industries domestically. Cambodia still has to enhance its efficiency and competitiveness by reducing cost contributed by non-trade barriers such as delay in export procedures, logistic performance and infrastructure, and custom clearance procedure.

Appendix 1: Pattern of Trade Between Cambodia and China

Source of data: The Heritage Foundation (Extracted in March 2017)

Index of economic freedom2 takes a comprehensive view of economic freedom which is indexed from 0, perfectly repressed, to 100, perfectly free. For example, countries ranking from 80 to 100 are recognized as free, 70.0–79.9 mostly free, 60.0–69.9 moderately free, 50.0–59.9 mostly unfree, and 0–49.9 repressed. Most, somehow, focus on policies within a country, with the assessment on the liberty of individuals to utilize their labor or finances without undue restraint and government interference.

Tax burden, the last indicator in economic freedom to be included in this study, is used to proxy the level of freedom from the tax burden, which also includes tariffs, being borne by individuals and firms. High tax rates reduce incentive and ability of investors to pursue their goals in the marketplace and thereby lower the level of overall private-sector activity, which in turn hinders the flow of international trade. High tax burden score means the governments permit individuals and businesses to keep and manage a larger share of their income and wealth for their own benefit and use and, however, maximize economic freedom. Tax burden score should have positive impact on trade flow.

Trade freedom is another aspect of economic freedom, which captures the degree to which governments hinder the free flow of foreign commerce. Many governments place restrictions on their citizens’ ability to interact freely as buyers or sellers in the international marketplace. Trade restrictions can manifest themselves in the form of tariffs, export taxes, trade quotas, or outright trade bans. However, trade restrictions also appear in more subtle ways, particularly in the form of regulatory barriers related to health or safety. Like other indexes of economic freedom, index of trade freedom ranks from 0, perfectly repressed, to 100, perfectly free. Higher index of trade freedom is expected to have positive impact on trade flow.

Government integrity is one of the aspects in the index of economic freedom3 by The Heritage Foundation. This aspect captures the extent to which the trading nations are free of the systemic corruption of government institutions by practices such as bribery, nepotism, cronyism, patronage, embezzlement, and graft. Though not all are crimes in every country or circumstance, these practices erode the integrity of government wherever they are practiced. By allowing some individuals or special interests to gain government benefits at the expense of others, they are grossly incompatible with the principles of fair and equal treatment that are essential ingredients of an economically free society. Index of government integrity ranks from 0, perfectly repressed, to 100, perfectly free. For example, countries ranking from 80 to 100 are recognized as free, 70.0–79.9 mostly free, 60.0–69.9 moderately free, 50.0–59.9 mostly unfree, and 0–49.9 repressed. Government integrity is expected to have positive impact on trade flow.