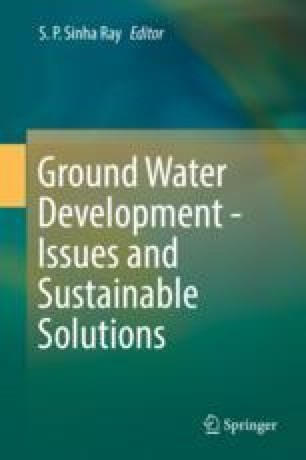 Arsenic Menace in West Bengal (India) and Its Mitigation Through Toolbox Intervention: An Experience to Share

Arsenic contamination in ground water in West Bengal was first detected in 1978, and subsequent epidemiological study in the 1990s revealed that the arsenic contamination in ground water was being spread over almost the entire meander belt of the river Ganga in West Bengal and Padma in Bangladesh and around 16.66 million population (2001) in 8 districts in West Bengal was at risk. Contamination range was more than permissible limit of 0.05 mg/l and even as high as 0.21 mg/l. The menace was vast, and both provincial Government of West Bengal and union Government of India jointly with UNICEF, WHO, universities, institutions and commerce houses mitigated the problem through administrative–medical–engineering toolbox intervention. A number of technologies had been developed for arsenic removal from ground water, and most sustainable was indigenous, as well as most promising was nano-media. More than 25 years fighting the menace, milestone experiences have been gathered for sharing with all water and wastewater professionals.