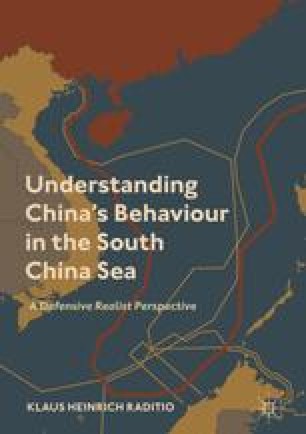 This chapter contends that the litmus test of being a genuine defensive realist state is China’s South China Sea (SCS) behaviour, in which China has so much at stake. A defensive realist state sends costly signal bearing the political cost. In the context of the SCS, the costly signals are (1) openness to non-military solutions, (2) self-restraint, and (3) reassurance policies.

To answer the above-mentioned questions, China’s behaviour is examined during the history of conflict in the SCS, namely the 1974 Paracel incident, the 1988 Johnson Reef incident, the 1995 Mischief Reef incident, and the 2012 Scarborough Shoal incident. This chapter contends that China defected in the 2012 Scarborough Shoal incident and the massive construction of artificial islands in 2014–2015.

Scarborough Shoal Defensive Realism Reef Incident Mischief Reef Offensive Realist State
These keywords were added by machine and not by the authors. This process is experimental and the keywords may be updated as the learning algorithm improves.
This is a preview of subscription content, log in to check access.