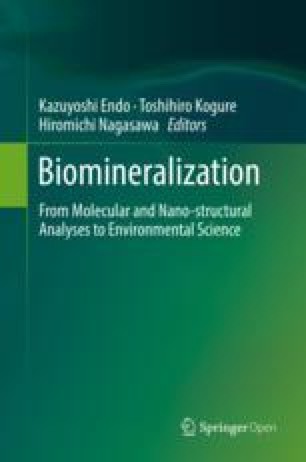 Scales of bony fishes are calcified tissues that contain osteoblasts, osteoclasts, and bone matrix, all of which are similar to those found in mammalian bone. The scales are composed of hydroxylapatite (HAP) and extracellular matrix which is mainly type I collagen fibers. We investigated the scales from goldfish by Fourier transform infrared (FTIR) and Raman spectroscopic analyses to characterize the components in the scales. The attenuated total reflection (ATR)-FTIR spectrum obtained from the surface coat of the normal goldfish scale was quite different from that of the backside coat of the same scale. The former showed a strong band at 1013 cm−1, which was assignable to HAP, and weak bands at about 1643, 1415, and 870 cm−1, whereas the latter showed a typical protein profile: strong bands at about 1631, 1550, and 1240 cm−1, which were assignable to amide-I, amide-II, and amide-III of collagen, respectively. We also investigated the local structure of goldfish scales by using micro-Raman spectroscopy. The Raman spectrum of the normal scale showed the amide-I band at about 1640 cm−1 from the collagen and the PO43− symmetric stretching band at about 961 cm−1 from the HAP. We discuss the implication of Raman and FTIR profiles for normal and regenerating goldfish scales.

Goldfish scale is a calcified tissue that contains osteoblasts, osteoclasts, and bone matrix, all of which are similar to those found in mammalian bone (Azuma et al. 2007). The scale is composed of hydroxyapatite (HAP) and extracellular matrix which is mainly type I collagen fibers, forming a highly ordered three-dimensional structure. It has been known that scales regenerate after being removed. Therefore, the goldfish scale is interesting from the viewpoint of the model system for the regeneration of mammalian bone.

Vibrational spectroscopy is useful for characterizing developmental changes in bone and other mineralized tissues. Infrared spectroscopy is used for examining the mineral properties and collagen maturity of bones (Boskey and Mendelsohn 2005; Paschalis et al. 2011) as well as protein structures such as collagen and osteocalcin (Jackson et al. 1995; Barth 2007; Mizuguchi et al. 2001). Raman spectroscopy is also available for bones and fish scales to provide information about protein and mineral components (Ikoma et al. 2003a, b).

In the present study, FTIR and Raman spectroscopic analyses were applied to scales from goldfish to characterize the components of the normal and regenerating ones. In particular, we focused on the pocket side of them, since the epidermal side of scales is more complicated because of the contribution of chromatophore.

Attenuated total reflection (ATR)-Fourier transform infrared (FTIR) measurements were performed at 25 °C on a PerkinElmer Spectrum-One FTIR spectrometer equipped with a universal ATR unit and a liquid nitrogen-cooled MCT detector at resolution 2 cm−1. A scale sample was placed on a diamond/ZnSe 1-reflection top-plate (PerkinElmer). The sampling depth of the ATR method was approximately 1–2 μm over the range of 2000–1000 cm−1. We obtained the ATR-FTIR spectrum for the spot (about 1.5 mm in diameter) with the accumulations of 200 scans.

Raman spectra were collected at room temperature (25 °C) with a Raman microscope (Kaiser HoloLab 5000 of Kaiser Optical System Inc.) using 532 nm Nd-YAG laser (2–5 mW at the sample surface), holographic transmission grating, and charge-coupled device (CCD). The spectral resolution in the present system is approximately 4.8 cm−1. We obtained the Raman spectrum for a spot (about 2 μm in diameter) with two accumulations of 30 s each. The sampling depth of the Raman measurement was about 100 μm. A scale was set on a slide glass covered with aluminum foil, and the pocket sides of the surface were measured by Raman spectroscopy.

6.3.1 Characterization of a Normal Scale from Goldfish by FTIR Spectra

6.3.2 Characterization of Regenerating Scales from Goldfish by FTIR Spectra

Figure 6.3b, e shows the second-derivative spectra of the surface and back coats of the regenerating scale after 1 week in the pocket side, respectively. The band at 1017 cm−1 caused by HAP in Fig. 6.3b was quite sharper than the corresponding band of normal scale in Fig. 6.3a. The spectral profile of the amide-I region was similar to that of the back coat, which suggested that the ATR spectra reflected the fibrillary layer as well as the calcified layer, since the thickness of the calcified one was less than 2 μm. The spectral profile of the back coat of regenerating scales after 1 week (Fig. 6.3e) was almost the same as that of the back coat of a normal scale (Fig. 6.3d).

Figure 6.3c, f shows the second-derivative spectra of the surface and back coats of the regenerating scale after 2 weeks in the pocket side, respectively. The absorbance of amide-I band was weaker than that of Fig. 6.3b, which suggested that the calcified layer became thicker. The spectral profile of the back coat was almost the same as that of normal scale (Fig. 6.3d).

It was difficult to obtain an infrared spectrum of fish scale by using transmission mode, because the thickness of the normal scale is >100 μm and the absorbance of most interesting bands was saturated. ATR measurements have an advantage over transmission measurement, because ATR technique makes it possible to obtain not only the spectral profiles of fish scales but also the information about the surface and backside coats of the scales separately. Therefore, ATR-FTIR spectroscopy is promising for monitoring HAP and collagen components during the regeneration process of goldfish scale.

6.3.3 Raman Spectra from Normal and Regenerating Scales of Goldfish

Figure 6.4a, b shows Raman spectrum from the area between adjacent circular ridges in a normal scale. The bands at about 1669 cm−1 and 1242 cm−1 were assignable to collagen amide-I and amide-III, respectively, and the intense band at about 961 cm−1 was originated from the PO43− symmetric stretching band for HAP (Penel et al. 1998). The intensity at 961 cm−1 was quite weak in the most outer part of the circular ridges, suggesting that HAP layer is not formed or thin on the collagen layers. The band at 1070 cm−1 was observed at the center of the scale, which was caused by type-B carbonate apatite (Awonusi et al. 2007). This interpretation was also confirmed by the FTIR bands at 1415 and 871 cm−1 (Fig. 6.2a). Furthermore, we found that the HAP layer became slightly thicker along the ridge line than the area between adjacent circular ridges (data not shown).

Figure 6.4c–e shows the Raman spectra from the area between adjacent circular ridges in regenerating scales after 2 weeks. The spectral profiles of the regenerating scales were similar to those of the normal ones except for the band at 961 cm−1, which were weaker than that of normal scale (Fig. 6.4a, b). The intensities of the band at 961 cm−1 were the order (c) < (d) < (e). This result demonstrated that the HAP layers were formed from the center part to the outer part during the regeneration process of the scale.