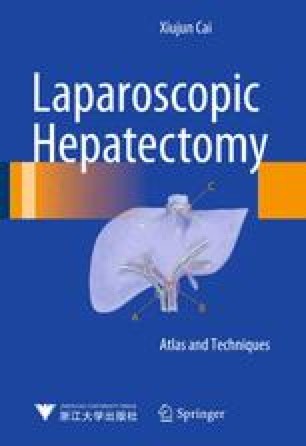 In 1996, laparoscopic left lateral segmentectomy was reported by Azagra et al. (1996). For now, this procedure can be performed in most institutes of hepato-biliary-pancreatic surgery worldwide. Furthermore, laparoscopic left lateral segmentectomy was supposed to be a standard practice according to “The Louisville Statement” (Buell et al. 2009). Management of the hepatic pedicle is the point of this laparoscopic procedure. In some cases, the branches of the hepatic artery could be dissected outside the liver parenchyma before liver transection. The falciform ligament (FL) and the fissure for ligamentum teres (FLT) are the anatomical lines for liver transection along which the secondary branches of the portal vein and the hepatic artery can be well managed by meticulous dissection and the left lateral segment can be anatomically resected.

Bile Duct Hepatic Artery Bile Duct Stone Secondary Branch Bile Duct Stricture
These keywords were added by machine and not by the authors. This process is experimental and the keywords may be updated as the learning algorithm improves.