Biomolecular Engineering in the European Community 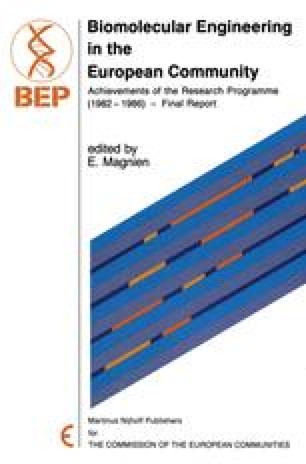 Biomolecular Engineering in the European Community pp 33-43 | Cite as

Review of Achievements of Sector 2.1 Genetic Engineering of Virus and Cellular Genes Important in Animal Husbandry

This was a very diverse sector containing subjects as different as virus vaccines, milk proteins, equine gonadotrophins and transgenic animals. In addition only five of the fourteen contracts involved were for the full period of 3 1/3 years; the remaining nine were for the last two years of the programme. However, despite this diversity of interest and the limited period, the programme produced, in addition to the specific results described below, three significant general achievements, namely:-

Envelope Glycoprotein Bovine Leukemia Virus Infectious Bronchitis Virus Potential Glycosylation Site Milk Protein Gene
These keywords were added by machine and not by the authors. This process is experimental and the keywords may be updated as the learning algorithm improves.
Download to read the full chapter text